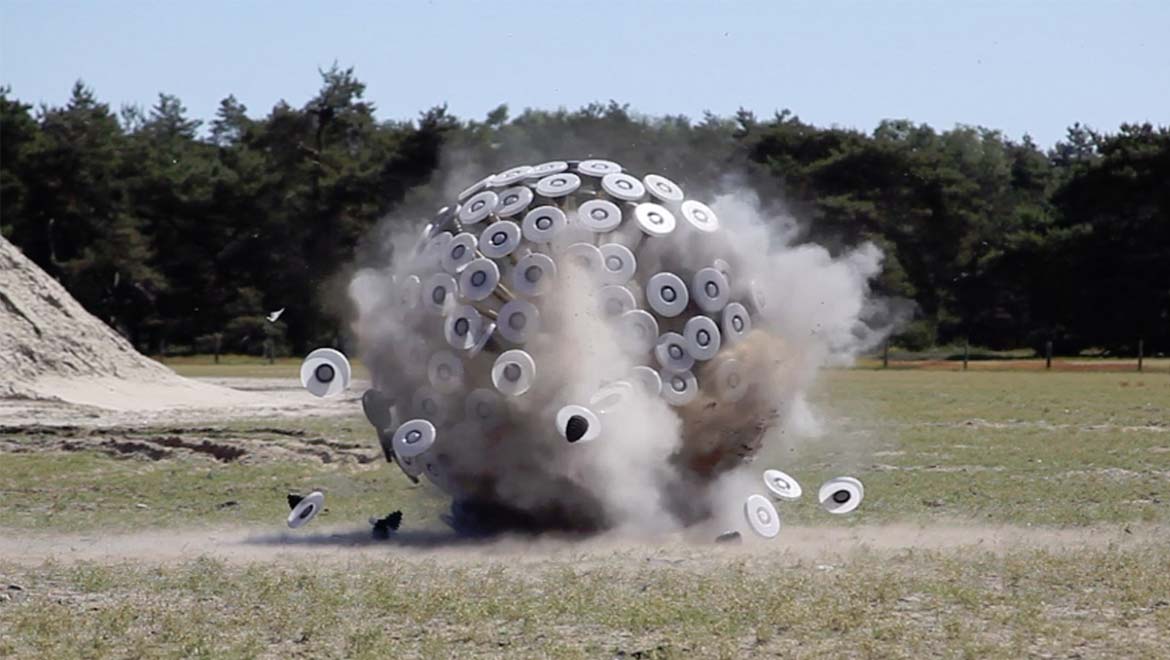 Antipersonnel landmines are indiscriminate devices which claim victims the world over, ranging from soldiers, civilians, aid workers and peacekeepers. These mines are explosive devices which are usually detonated by the presence or proximity of a human, but can also be triggered remotely. It’s estimated that there’s 110 million mines buried in 70 different countries around the world, with another 250 mine stockpiled by armed forces. Due to the random nature of these devices, civilians make up the largest percentage of victims, with estimates at around 79%. Whilst a cheap landmine costs only $3, it costs $1,000 for it to be safely removed.

Currently, mine-sweeping is usually carried out manually by experts who diffuse the mines individually once they have been located. This is a highly skilled and dangerous job, with the UN estimating that for every 5,000 mines cleared, one expert will be killed and two injured.

Massoud Hassani, from Afghanistan set about designing a novel and low-cost solution to the clearance of minefields. Hassani is a student at the Design Academy Eindhoven, in the Netherlands, and his creation is known as the Mine Kafon. Hassani was inspired by the cheap wind-powered toys he and his friends used to make as children.

The Mine Kafon consists of a 17kg metal ball with a cheap GPS tracking device inside. From this central core bamboo legs are attached until the whole core is covered is a spiky layer. Each leg has a round rubber foot at the tip, similar to a sink plunger. These are designed to ensure maximum contact with the ground as well as providing suspension which allows the Mine Kafon to easily roll over minor bumps and holes in the ground.

The Mine Kafon is wind powered, and designed to move over open ground in a way similar to giant balls of tumbleweed in the desert. It has been designed to be heavy enough to trip and detonate mines as it rolls over them, and whilst the bamboo spikes get blown off, the central metal core stays intact. It can handle up to four blasts before it can no longer propel itself forward and will require retrieval and repair.

The length of the bamboo spikes is based on the height of an adult’s leg, which means that the core is kept high enough off the ground to avoid damage from most mines, which are designed to take a human leg off below the waist.

The Mine Kafon costs under $40 to build and was shortlisted for the London Design Museum’s 2012 Design of the Year Award. Hassini hopes that by raising awareness of the problems of mine disposal, he will inspire others to join the effort to make the world mine-free by 2027.

The design has been tested by the Dutch military and development groups, who say that some issues for its successful use include the fact that it would be difficult to retrieve from a minefield when it required repair. Another problem with this design is that it currently falls short of industry safety standards, says Adam Komorowski who is an expert at mine clearance. This is partly due to the fact that the Mine Kafon’s direction is dependent on the wind, which means it can’t perform a systematic search of an area. It could potentially be used to help identify areas where mines were placed, before more specialized equipment was used.

Hassani is not to be deterred, and is working on variations of his existing design. After creating the original Mine Kafon in 2011, he set up the Mine Kafon Foundation which concentrates on the research and development of mine clearing technology. This includes remote-controlled models which also contain metal detectors, as well as an airborne drone.

Whilst land mine use has now dropped due to the Mine Ban Treaty, many mines still remain active throughout the world. It seems as though the inventions of Hassani will go a long way to helping remove these mines and return this land to communities in the future.