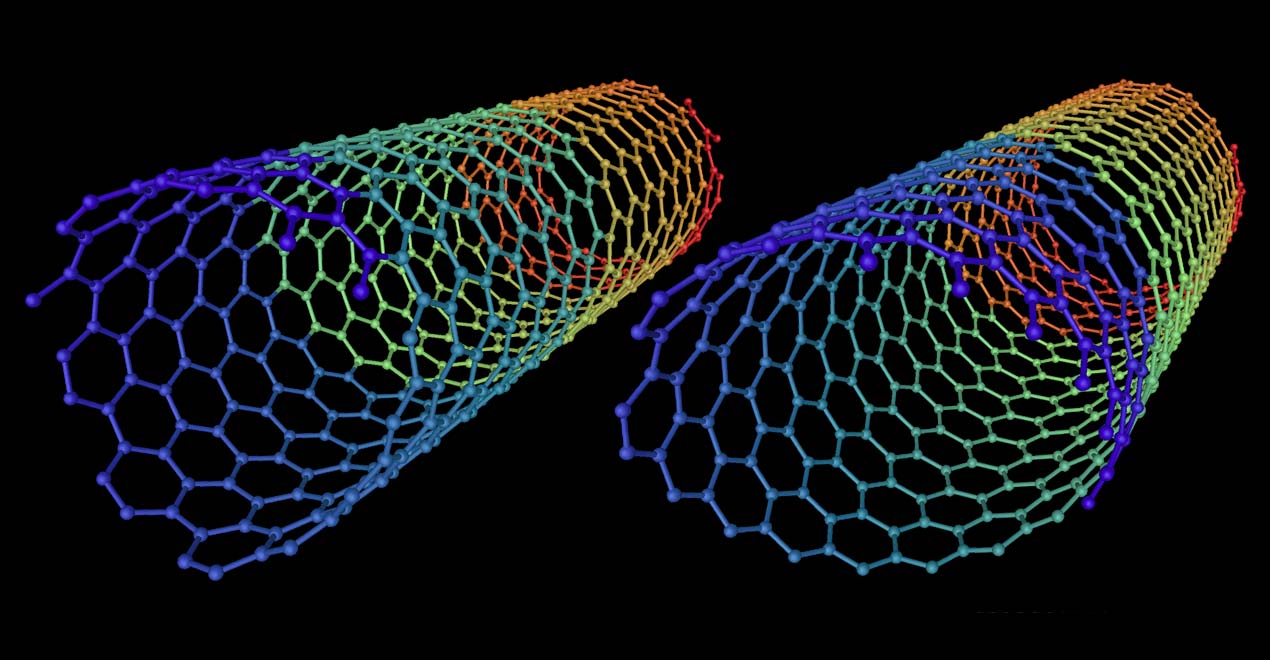 Since their discovery, carbon nanotubes (CNTs) have opened many avenues in material science. What makes them fascinating is their atomic structure, which dictates their electromagnetic and mechanical properties. They exhibit tremendous strength and conductivity while only being one atom thick. As they are a unique among other fullerene carbon structures, they are considered a new allotrope of carbon.

An allotrope describes the many physical forms an element can have. Diamond and graphite are well-known allotropes of carbon. During the 1960s, chemists Kroto and Smalley, with later help from Curl, discovered the fullerenes, a graphitic allotrope of 60 carbon atoms, arranged like a sphere. The discovery of the third allotrope of carbon was awarded the 1996 Nobel Prize in Chemistry. There are now eight allotropes of carbon, with CNTs being a recent addition.

The importance of this discovery is that previously, graphitic structures were always found to be flat, one-dimensional sheets. Fullerenes and CNTs are structures that resemble graphite, but they are curved. For CNTs, you can envision a hexagonal grid on a flat sheet of paper (graphite), and then roll the sheet into a tube. The tubes wall will be one carbon atom thick, but the diameter of the tube can vary in size. Depending on the orientation of the roll-up vector, the electronics of the CNT can be metallic or semi conductive.

Phoresis means migration and there are several types used in science. Biologists and biochemists use electrophoresis to separate DNA, RNA and proteins for analysis. Analytical chemists use a technique called isotachophoresis to selectively separate ionic analytes. Thermophoresis (or Ludwig-Soret effect) is the phenomenon where mixtures of particles separate in response to a temperature gradient.

Researchers at Rice University have discovered a force field-induced movement called teslaphoresis. The system uses a Tesla coil to remotely oscillate positive and negative charges in short segments of CNTs. In response, the CNTs align themselves end-to-end, forming long wires. What starts as an amorphous pile of CNTs, ends with self-assembled wires that can be used to power circuits. 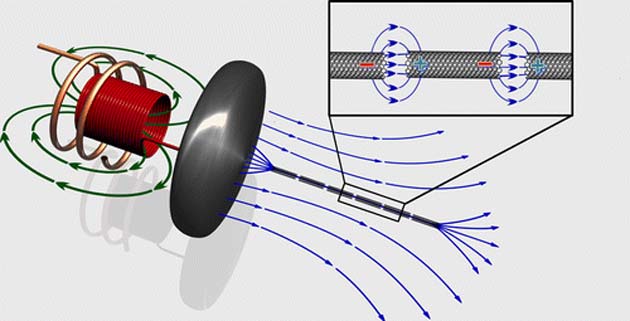 This force-field effect on matter has been known, but not on this scale or with such results. What was limiting previous experiments was the generation of a force-field that was powerful enough to extend beyond a few feet. With a proprietary Tesla coil, the researchers have been able to assemble CNTs all the way across a room, up to 20 meters. Currently, only one Tesla coil is being used in the experiments, but researchers envision using multiple tandem coils that can generate complex self-assembling patterns.

The researchers also described further discoveries when using CNTs within the Teslaphoretic field. The first being the near field energy of the Tesla coil wirelessly powering the nanotube circuits. The array remotely self-assembled and current began to flow through the nanowires. A second discovery was that the Tesla coil could even generate a tractor beam-like effect. After forming, the nanowires could be pulled towards the coil. The team is excited about the fundamental questions in physics and chemistry that are being produced with this research.

The authors note that when assembly occurs, the CNTs do not bundle-up, they are individual nanotubes that align with the field. This phenomenon has the potential for purifying CNTs to a much higher degree than is already achieved. There are three major methods for generating CNTs:

All these methods can produce CNTs, but end purity is always difficult to achieve. It is desired to have single-wall carbon nanotubes (SWCNT), but the methods above often create multi-walled carbon nanotubes (MWCNT). It is difficult to control the diameter of CNTs that are produced and smaller CNTs will nest inside large diameter CNTs, like Russian Kachina dolls. These nested tubes are MWCNTs. Again, the diameter and roll-up vector of a CNT affects its electrochemical properties and MWCNTs are a mixed bag. Perhaps with the aid of teslaphoresis, MWCNTs can be separated into their individual SWCNTs, which would be huge for the field of nanomaterials.