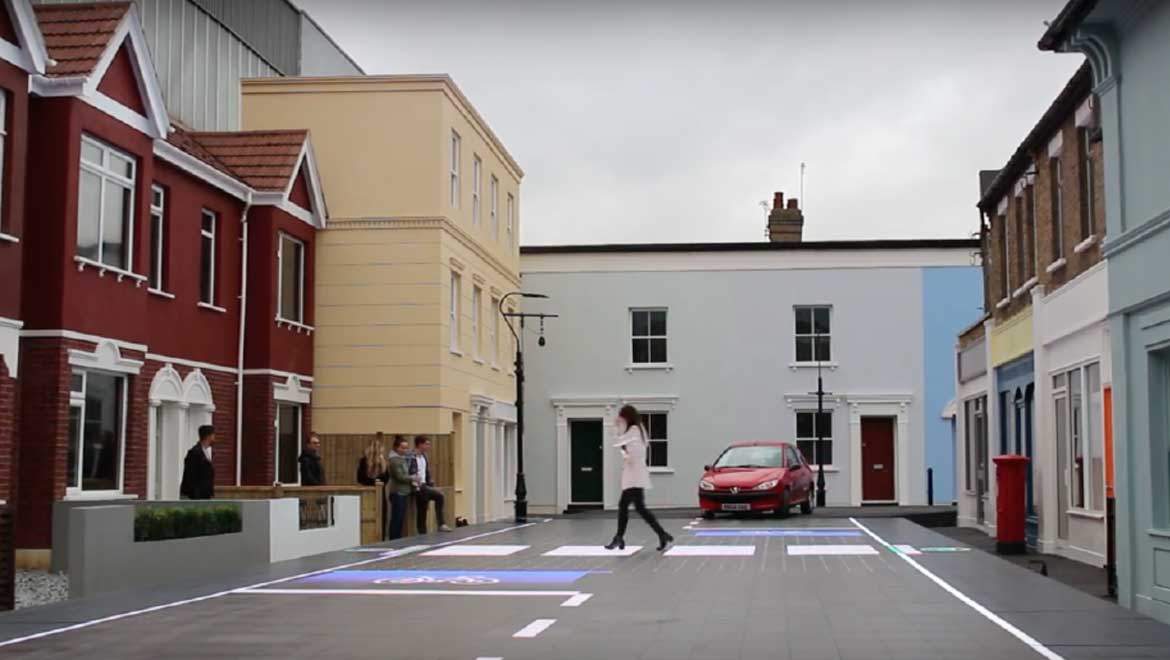 In just the UK alone, there are an estimated 7,000 road traffic accidents at pedestrian crossings each year, which of course are always been considered the safest way to cross a road. With that in mind, Direct Line, an insurance company have collaborated with the architectural firm Umbrellium to create a new ‘Smart Crossing’ known as the Starling Crossing, designed to help keep pedestrians safer.

The new Starling (STigmatic Adaptive Responsive LearnING) Crossing is very different from its predecessors in that it’s not just painted lines on the road – it’s packed with interactive features which respond to both pedestrians and the traffic around them.

It’s about time that our pedestrian crossings evolved to suit our faster pace of life, says Usman Haque, from Umbrellium: “We’ve been designing a pedestrian crossing for the 21st Century. As opposed to a “crossing that you know were designed in the 1950s, when there was a different type of city and interaction.”

How the Smart Crossing Works

Smart Crossing uses machine learning to make crossing our roads safer, and today a prototype was revealed on a street at a TV studio in South West London. The idea behind using the street at the TV studio is that many different real-life scenarios can quickly be tested, including a cyclist approaching the crossing in the blind spot of a van, a child running out into the road and many pedestrians looking to use the crossing at the same time.

The technology behind the Smart Crossing is embedded into a ‘responsive surface’ which is laid over a normal road surface. Umbrellium designed a steel substructure to protect the electronic components, combined with a layer of ultra-bright LEDs which are protected from the elements by a layer of high-impact plastic.

The road surface components are combined with two cameras which monitor the crossing from each side of the road. The images are analysed, with objects classified using machine learning. The system then decides what form of crossing is needed and at what point on the road it needs to appear. The LED lights will also change colour as necessary.

Once a pedestrian approaches the area of the crossing, indicated by a red circle on the pavement, the Smart Crossing appears across the road. The pattern is that of a standard pedestrian crossing, chosen due to its familiarity – white lines with a blocked out area for cyclists in front of cars, combined with red and green lights on the road for both pedestrians and drivers, to indicate when it’s safe for them to proceed.

Because the Smart Crossing incorporates red and green LEDs, Hague goes so far as to suggest that “we have to question whether traffic lights even make sense anymore.”

How the Smart Crossing adapts to different scenarios

The speed with which the Smart Crossing responds to users is impressive – less than one-hundredth of a second. This is fast enough to react to scenarios such as a child running out into the road. In this case, the crossing lights up with distinctive red chevrons, warning oncoming traffic to stop whilst also directing the pedestrian back to the safety of the pavement.

At times of heavy use, there may be a lot of people trying to cross the road at the same time. In this case, the markings of the Smart Crossing become wider. The vehicle stop line and area for cyclists also move back to accommodate the wider crossing. Once all pedestrians have safely crossed the road, the Smart Crossing simply disappears until it’s needed again.

This system certainly looks as though it could make crossing our roads much safer, for all users. It may be a while before we see the Smart Crossing on our roads though, as Haque mentions that “the actual deployment will come later, when we figure out the logistics of implementation.” In the meantime, the code behind the technology has been made open source in an attempt to bring this technology to our roads as soon as possible.