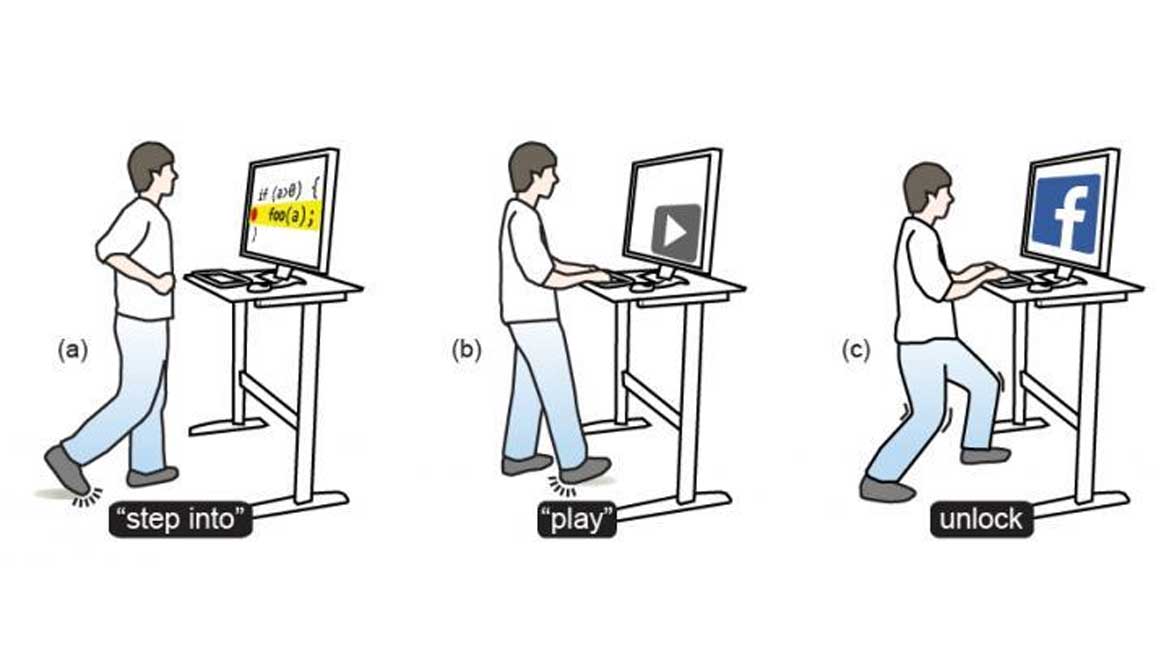 We’re all victims of the computer vision syndrome, visiting social media accounts at work, inactive by sitting at our stations all day or in some manner abusing and impairing the performance of our bodies because of excessive use, or should we say misuse, of computers rooted to desks. But this problem, since time immemorial, always seems to draw a who-has-the-time-for-exercise response!

Observing the sedentary lifestyle trend, Prof. Daniel Vogel, William Saunders and a team of researchers at the University of Waterloo’s Computer Science School have created the Tap-Kick-Click. As the name suggests, the concept encourages users to be physically active by means of interactive yet discreet foot movements such as tapping, kicking and jumping or a combination of these, to complete simple operations on their computers while standing at their workspaces. The whole process is monitored by Kinect cameras placed under the table and special devices attached to the shoes, with pressure sensors on the toes and heels, to be activated for mobility. Sure sounds like fun but hello hard work! This setup not so much completely replaces the mouse and keyboard as much as it encourages workers tied to their devices to just move.

There’s almost no limit to what T-K-C can be employed for — internet browsing, reading e-books, writing and debugging code, selecting options from a menu, launching applications, and so on. A guide presents itself onscreen (on taking a single leap) to aid and remind the user of commands and actions. The makers also decided to take a shot at quelling cyberslacking, simply defined as frivolously spending time on the internet during office hours therefore reducing productivity, by introducing a more advanced workout to access certain content. An example is accomplishing a challenging lunge to see a social networking site, which on changing body position locks the page disallowing further viewing. But why not just ban social websites permanently from work systems? Vogel believes in a more sophisticated method where he says, “Our technique lets people use those sites, but since they need to stand in an uncomfortable pose while viewing them, they’re naturally encouraged to keep it brief.”

This innovative alliance between physical activity and computers, similar to treadmill and standing desks, in the digitalized world, takes healthcare a long way forward in decreasing risk of disease such as coronary attacks, diabetes, anxiety etc and obesity caused by lethargy and inaction, apart from nourishing manual and mental capacity and relieving stress.

Top image: Professor Daniel Vogel presents Tap-Kick-Click: Foot Interaction for a Standing Desk at the Association for Computing Machinery's Designing Interactive Systems 2016 in Brisbane, Australia today. The idea behind the research project, conducted with Master's student William Saunders, is that computer users at standing desks can increase their physical activity through indirect, discrete two-foot input using combinations of kicks, foot taps, jumps, and standing postures which are tracked using a depth camera and instrumented shoes. Tap-Kick-Click interaction enables (a) physically and productive "foot input only" breaks; (b) increased physical activity with mouse and keyboard input; (c) and, as a way to self-control cyberslacking. CREDIT University of Waterloo