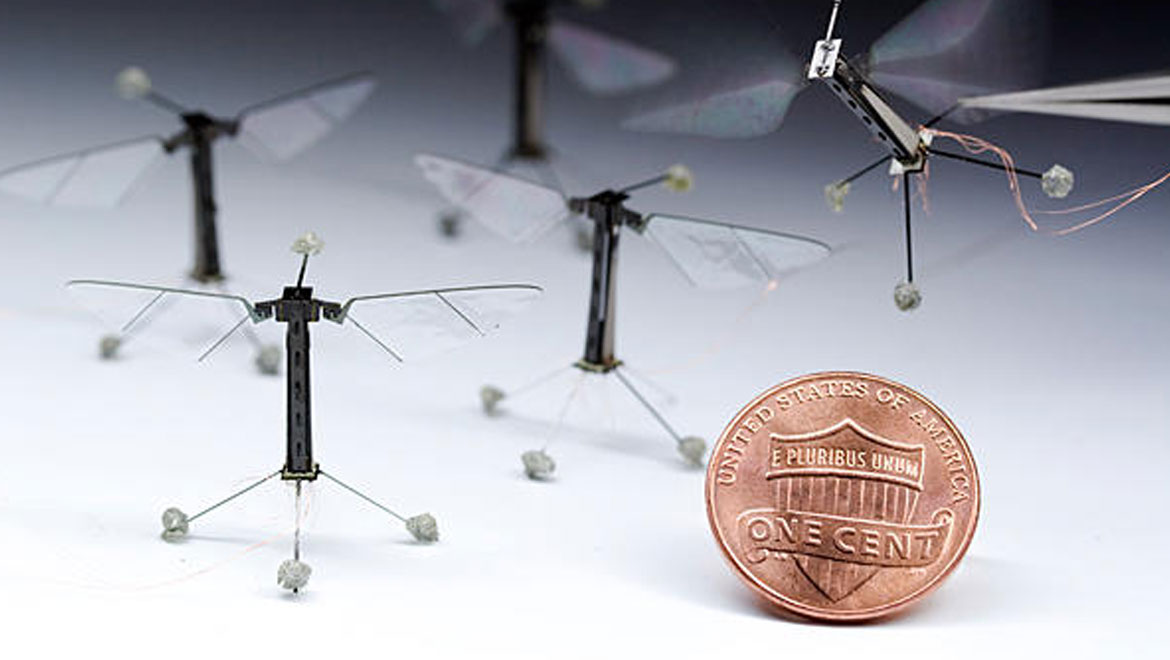 Class Insecta consists of the largest number of species in the world with over 1 million documented types, and they seem to have roused humans and their research owing to the insects’ extraordinary competence while maintaining body weight-balance and mid-flight control due to their natural anatomy. The wings flutter at a high frequency, approximately 120 times/min, allowing them to easily fly with a great momentum and dodge obstacles in their path, simultaneously. Besides this, with their miniature yet strong build achieve a multitude. Although pesky sometimes, it is guaranteed that there isn’t another’s locomotion more rhythmic and agile!

Scientists and engineers at Harvard University’s Wyss Institute spearheaded by Robert Wood, realizing that this was an area of study fairly untapped, took upon the task of mimicking flying insects’ biology, particularly that of the complex honeybees, by designing a swarm of mini-robots called RoboBees that could carry out a variety of tasks individually or as a collection. Based on the concept of micro-air vehicles (MAV) that are versatile and aerodynamic, these tiny, maneuverable bots, about 80 mg in weight with a wingspan of 3 cm, were facilitated to perform functions, in realtime, such as load-lifting, drifting, landing in aerial surfaces, vertical take offs and steering, all powered by electrically charged flexible “muscles” and the use of an energy-saving electrode patch for adhesion.

There are specifically three parts to a single tethered robot-bee:

A brain implanted with sensors, acting as the eyes and antennae, for sensing and response

What were these artificial flyers fabricated from? Supple pieces of ceramic in piezoelectric actuators in the flappers and joints composed of plastic and carbon fiber. This seems like a fairly uncomplicated structure but the design involved an elaborate process of construction and the discovery of a new method in the world of robotics called MEM (pop-up) or microelectromechanical technology. Whew!

In replicating the biological action of honey-making bees, RoboBees find practicality in crop pollination efforts and agriculture, disaster management and relief operations, surveillance, climate change and in the environment. Although the applications are immense, certain improvements such as energy consumption, self-sufficiency in terms of sensing the setting, hovering untethered and other flight operations are being ideated to produce a more efficient and dependable aero-microbot. But as National Science Foundation’s (NSF) Director Berg puts it, “Projects such as this one show that innovative solutions can arise from exploiting a synergy between biological ends and engineered means.” After millions being spent on the bee-drone development, a market release between 5 to 10 years is currently being predicted.

With this, it is certain that nature has indeed made an everlasting impression on science and technology and is only motivating researchers and creators of the future to push the limits further!

Top image: Several RoboBees sit on the ground next to a 19 mm-diameter United States penny, while another is held in tweezers with the wings activated. (Fair use)