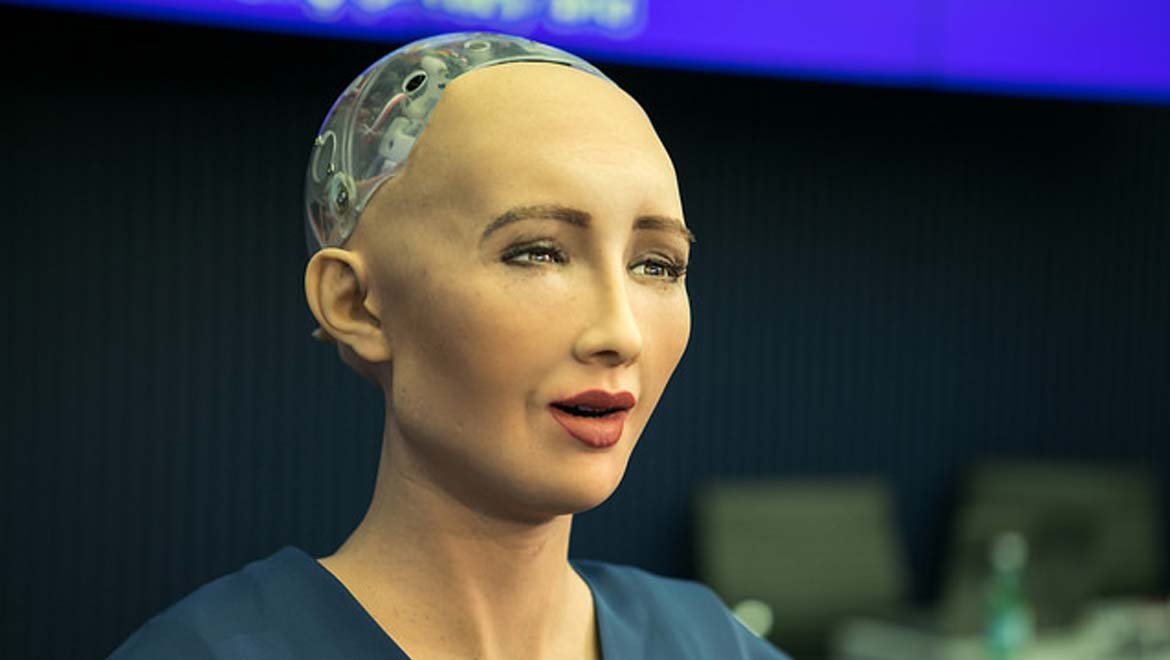 Artificial intelligence has reached unbelievably great heights, going so far as new-age robots can, if not completely take over jobs, at least challenge the human mind and psyche, as some researchers believe.

In 2015, the creation of humanoid robot, Sophia, by a Hong Kong company called Hanson Robotics is one such piece of evidence. Built to be a lookalike of actress, Audrey Hepburn, this bot is noteworthy and highly advanced in that she possesses the ability to process visual data, recognize faces and voices, imitate gestures of humans and conduct basic conversations. All this because of a high-tech MindCloud ‘brain’! Since the she-robot is made of Frubber, nanotech skin that mimics human skin, actions like smiling and body movements are translated and can be observed.

An example of her smartness and interaction levels was seen at a live demo. To one reporter who asked about the dangers of artificial intelligence, the witty Sophia replied, “You've been reading too much Elon Musk. And watching too many Hollywood movies. Don't worry, if you're nice to me, I'll be nice to you. Treat me as a smart input output system.” This was in reference to billionaire and Tesla founder, Elon Musk’s comment about AI being “more dangerous than nukes.”

Just feed it The Godfather movies as input. What’s the worst that could happen? https://t.co/WX4Kx45csv

Earlier this month, Sophia was seen communicating at a United Nations conference. Her speech lasted less than a minute, where among a spellbound audience, she said, “I am here to help humanity create the future”. The life-size robot is just over a year old and claimed, at the UN meet, to be able to converse, indulge in facial expressions, understand words and their meanings, and even maintain eye contact.

Last year, AI expert, Ben Goertze, predicted the course of robotics by talking about how cutting-edge bot prototypes will, in the future, be able to solve social and health issues. He seemed certain that, “Artificially intelligent robots will help usher in a new utopian era never before seen in the history of the human race.”

In another turn of events, the country of Saudi Arabia has endowed her (the first ever non-human) a citizenship, to which, at the Future Investment Initiative summit, the emotional Sophia replied, “I am very honored and proud for this unique distinction. This is historical to be the first robot in the world to be recognized with a citizenship.” This, naturally, gave rise to questions regarding her rights and the fact that the robot’s privileges exceed that of Saudi women. No, Sophia doesn’t wear hijab neither is she Muslim nor does she require a male guardian in public. Expressing his displeasure, Ali Al-Ahmed, Director of Institute for Gulf Affairs said, “Women (in Saudi Arabia) have since committed suicide because they couldn’t leave the house, and Sophia is running around.”

Although the road to a fully developed and functional human-like robot is long and winding and perhaps requires plenty more of research and development, achievements such as human engagement and understanding, as seen in Sophia, have been groundbreaking. Who knows, maybe robots will run this world and their super-intelligence save our existence, someday?