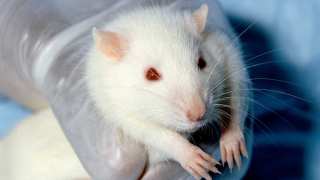 Deep brain stimulation (DBS) is a branch of neurological medicine in which small devices that can deliver electric impulses are placed into the brain, in areas that are damaged or affected by disease. The central idea behind DBS is that these devices, which are most often electrodes, are used to replace, augment or modulate abnormal activation (or ‘firing’) in the neural circuits found in these brain regions. This may in turn correct or alleviate their manifestations in the mind or body, which include uncontrollable movements in Parkinson’s disease (PD). DBS electrodes are increasingly popular among clinicians treating severe forms of PD or other similar neurodegenerative conditions.

Despite their growing popularity, DBS has fairly patent drawbacks, including the need for invasive procedures to place them in the necessary locations deep within the brain. If this placement is off by even a tiny fraction, the DBS electrodes will not function properly, or even produce unwanted side-effects. In addition, the treatment is still at a relatively primitive stage, not least in terms of the design and materials incorporated into the electrodes. Many neuroscientists view them as too large and unwieldy for an optimal integration into the delicate arrangement of nerve tissue that make up their ideal locations.

A better solution in DBS device design may be thinner electrodes that are more flexible, and do not create any kind of brain-tissue disturbance when implanted. In addition, these electrodes would need to be far more complex, supporting thousands or even millions of electrodes. This increased number of electrodes would better amplify desirable, or normal, signals within brain tissue while controlling abnormal ones that drive the loss of full motor control in PD. DBS systems could also benefit from the ability to record and send information on brain activity, such as how the affected neural circuits are responding to the treatment after time.

Many authorities and agencies, including the Defense Advanced Research Projects Agency (DARPA), an agency of the U.S. Department of Defense, have recognized the need to develop new-generation DBS devices that address these issues. DARPA have implemented a Neural Engineering System Design program (NESD), which has engaged Ken Shepard, a professor of electrical engineering at Columbia Engineering to work on devices that are closer to the ideal electronic interface for the brain. Professor Shepard will form a team from university and industry partners, including Medtronic USA, California Institute of Technology, Northwestern University and Baylor College of Medicine with the aim of inventing their prototype, which will be funded for as much as 15.8 million dollars. 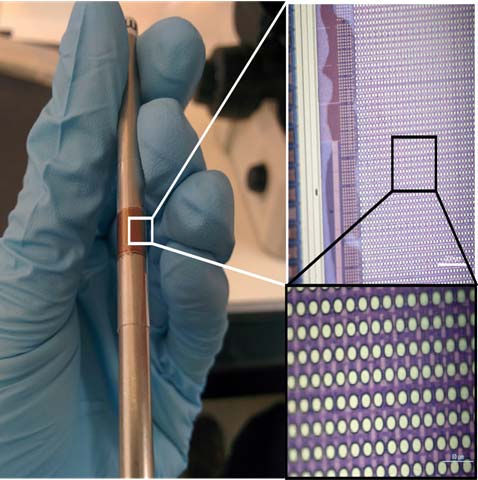 A flexible multielectrode array designed by Shepard and his team. If successful, this noninvasive device could alter the lives of people with hearing and visual impairments and neurodegenerative diseases. —Photo courtesy of Ken Shepard

When modern DBS was first proposed for a clinical trial process, and accepted as a treatment as a result, its uptake was still very low due to the invasive nature of its implantation and the reduced effect of its activation in its relatively small (tens of thousands) pool of its users. However, these new electrode arrays could represent an improved risk-to-benefit ratio, and deliver increased control over the effects of neurodegeneration for more affected patients. It is to be hoped, therefore, that DARPA is not overly ambitious in its aims for the project. The transnational team anticipates that it will take four years to complete NESD, at which point they will submit it to regulators as a device to be tested in human subjects.

This optimistic time-line will be supported by what may be the path of least resistance in developing the new line of DBS electrodes. Professor Shepard says that it will take the form of a singular ‘sheet’ of CMOS circuitry on which at least a million electrodes will be mounted. This will lie along the surface of the brain over affected tissues, to better stimulate target regions and to record data. The NESD electrodes may also be wireless. This is a significant difference to the wired interfaces of some current DBS products, which may be connected through the skull with wires placed under the skin to a generator, which may also be placed under the skin of the chest.

These circuits would be based on fairly conventional complementary metal-oxide-semiconductor (CMOS) architecture, which incorporate silicon as an electron-transfer material. However, they would also be much thinner and lighter than the average DBS electrode array, as well as supporting a greatly improved standard of data transfer across and about the implanted brain region. Professor Shepard also intends his DBS array to treat conditions besides PD. He sees potential in this treatment for patients with hearing or vision loss, in which the electrodes could correct gaps between the sensory organs and the brain. DBS is also used in conditions such as severe forms of headache, and is proposed by some researchers as a treatment for serious cases of obsessive compulsive disorder or epilepsy.

Currently, DBS is only offered to patients with severe forms of their respective illness that has not improved in response to less invasive treatments. It is still viewed as under-developed and overly risky by some neurologists. However, advanced DBS systems such as those proposed by Dr. Shepard, combined with next-generation implantation procedures, could imply the potential for a new age for electronic brain interfaces that could help people manage neurodegenerative disorders, recover lost sight or hearing, or relieve chronic pain in the future.

Altinay M, Estemalik E, Malone DA, Jr. A comprehensive review of the use of deep brain stimulation (DBS) in treatment of psychiatric and headache disorders. Headache. 2015;55(2):345-50.