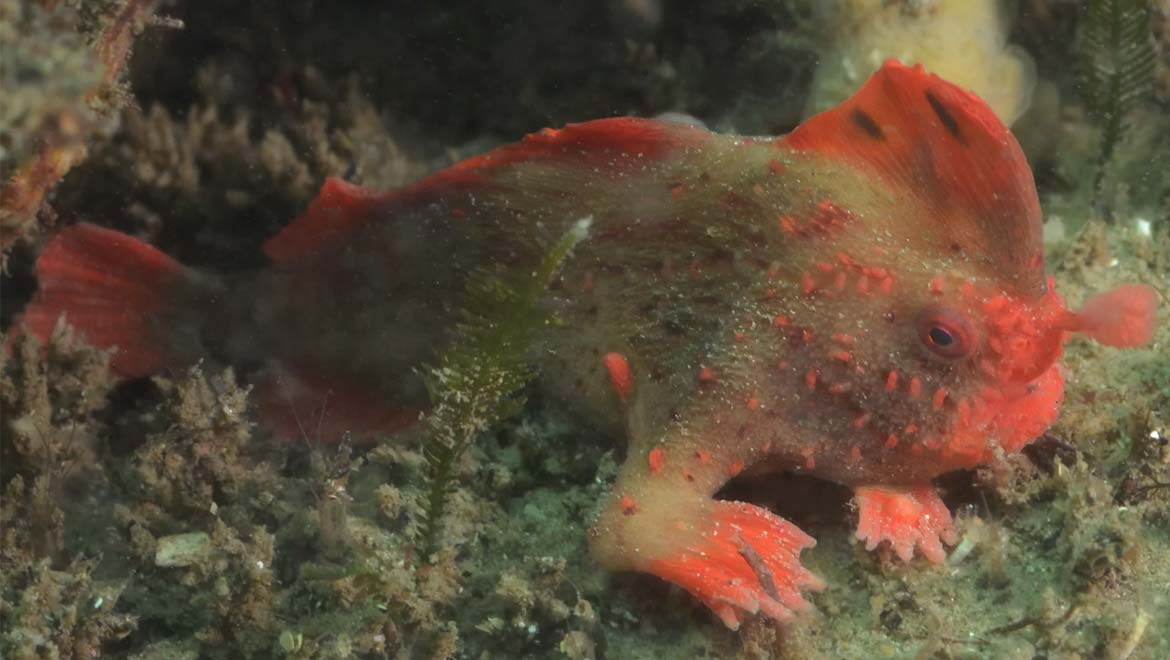 Nestled in the corner of a small reef just off the coast of Tasmania, a new population of critically endangered red handfish (Thymichthys politus) have been discovered, giving hope for the conservation of this species into the future.

The population of this fish has now been given a big boost, thanks to eagle eyed members of the public involved in a citizen science project known as the Reef Life Survey.

This elusive fish is found in waters around Tasmania, with the only known colony thought to be centred on a reef in Frederick Henry Bay, just off the coast of south-east Tasmania.

After a member of the public taking part in the Reef Life Survey alerted scientists to the fact that they thought they had spotted a red handfish on a different reef a few kilometres away, leading scientists to carry out a more detailed survey of that zone, specifically focused on identifying red handfish.

The survey very nearly ended unsuccessfully, said Antonia Cooper, the member of the scientific dive team who found the fish:

“We were diving for approximately three and a half hours and at about the two-hour mark we were all looking at each other thinking this is not looking promising. My dive partner went to tell the other divers that we were going to start heading in and I was half-heartedly flicking algae around when, lo and behold, I found a red handfish.”

The team estimate that the new reef, the location of which has not been made public, is probably home to between 20 and 40 red handfish, effectively doubling the population of this species which is on the brink of extinction.

It’s thought that the new population is genetically isolated from the previously identified population, as this species is not known for swimming long distances. Speaking to Guardian Australia, Rick Stuart-Smith from the University of Tasmania and the Institute for Marine and Antarctic studies, explained in more detail:

“If they are disturbed they can do a little burst, they will swim 50cm in a burst and then settle again. They waddle on their fins, they are just trudging along the bottom. In fact you hardly ever see them actually moving. Imagine something that’s seven or nine centimetres long trying to walk 1km on a rocky ocean bottom … they are sitting ducks, plus it’s just a big effort for them.”

Scientists involved in the conservation and protection of red handfish are immensely relieved at the discovery of this new population, not only because it increases the possibility of this species surviving into the future, but also because it gives them a valuable insight into the habitat preferences of the red handfish. Stuart-Smith said: “We’ve already learned a lot from finding this second population because their habitat isn’t identical to that of the first population, so we can take some heart from knowing red handfish are not as critically dependent on that particular set of local conditions.”

The plan now is to consider the possibility of implementing a captive breeding program for the red handfish. Previously, this idea was always discounted due to the fact that the population was too small to cope with the removal of breeding pairs from the wild. Now that the population of red handfish is effectively though to have doubled, a captive breeding program could be a viable option in the fight to conserve this species into the future.