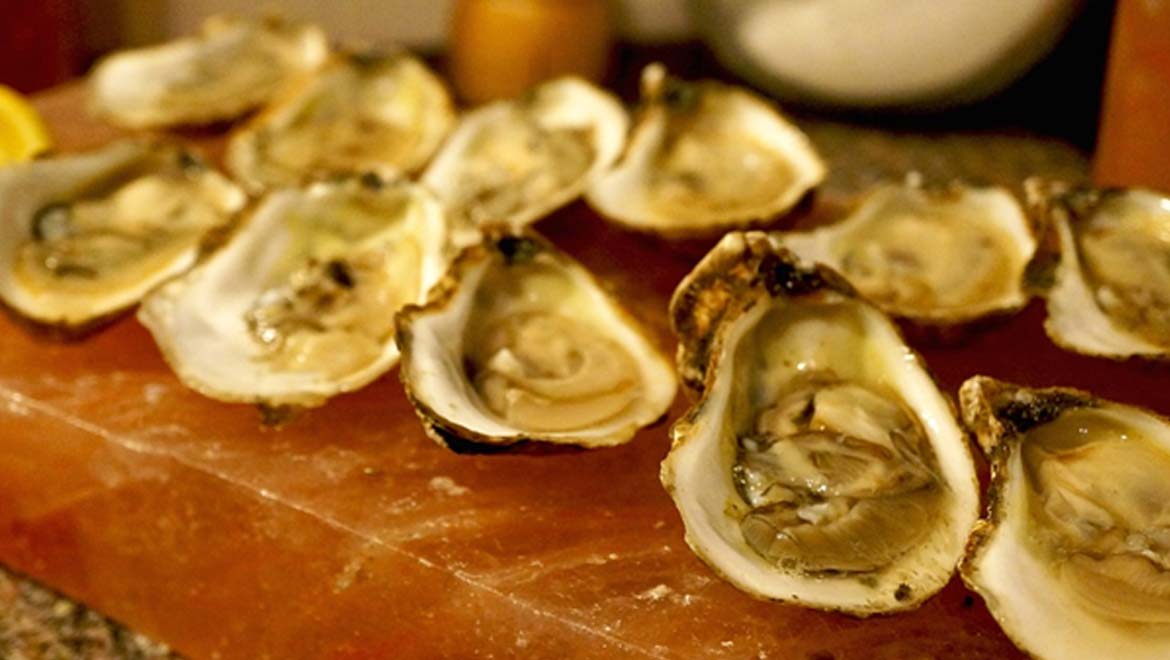 Many consumers enjoy fresh seafood dishes that involve minimal or no cooking. However, eating protein sources in this way is one of the most common causes of food poisoning, which is related to the ingestion of dangerous toxins. These toxin levels increase if seafood is not stored at optimal temperatures before eating, and even just after the seafood is caught and killed.

Unfortunately, the methods used to tell if seafood has ‘gone off' are time-consuming and can be detrimental to the commercial value of food.

A team of researchers has developed a new type of bioelectronic device that can determine how fresh seafood is. This device is a synergy between some parts of the human olfactory system and field-effect transistors.

The electronic 'nose' does not have to be placed inside a piece of food (e.g., fish) to detect the toxins in it. It can tell the general quality, which is largely determined by the time elapsed from the point at which the food was caught or harvested, of samples.

The device was able to out-perform a conventional scientific method used in quality testing (gas chromatography/mass spectroscopy or GC/MS) in this regard, and also beat the older technique in detecting impaired flavor within two days. The e-nose was also able to detect a chemical marker of bacterial contamination in oysters that the standard method could not.

This new device promises to be an asset to relevant industries and end-point consumers in the future.

Relationship between Seafood and Bacteria

Many types of seafood, for instance, oysters, are traditionally eaten raw. Others form the basis of dishes that are very lightly cooked or are cooked through chemical reactions (such as ceviche) rather than by use of heat.

Therefore, it is critically important that seafood is consumed when it is fresh.

However, commercial and real-life constraints often result in the need for the storage of these foodstuffs, often for several days at a time.

This method has a negative impact on the quality of the products due to possible bacterial activity in raw food. These bacteria give off chemical products as they metabolize the protein they find themselves in, which is manifested as increased undesirable odors – strong, fishy smells, in the case of seafood. Some bacterial species also produce toxins that are associated with food poisoning.

The bacteria in raw seafood produce the smelly by-product, dimethyl sulfide (DMS), as they digest their food. This chemical is taken as a measure of food spoilage when testing for quality, using methods such as GC/MS. The bacteria may be tested by running PCR analyses on the food for their genes.

But these sampling methods can result in negative effects on the appearance and integrity of the food to be assessed, as often-visible samples need to be removed and prepared for testing. They are also not feasible in large-scale commercial settings due to time and resource constraints.

GC/MS may be the most amenable testing process because this procedure can test the headspace, or air, in the immediate vicinity of packaged seafood. However, it may not be sensitive enough to detect DMS levels until they have accumulated for a number of days.

Detection of Spoilage in Seafood

Hence, a group of researchers from South Korean universities undertook a project to develop a new device for the improved detection of spoilage in raw seafood.

As the targets were odorant molecules, it made sense to incorporate proteins that had evolved to detect such chemicals in nature.

The team selected human olfactory receptor proteins, which are present in the nerve cells of the nose, for this purpose. The proteins could activate a molecular tube structure made of carbon atoms, which is common in nanotechnology and can also operate as a field-effect transistor.

The reactions of the olfactory proteins can, thus, be converted to readings on a computer interface, using these transistors.

This artificial nose was found to be sensitive to many odorant molecules with great accuracy and specificity. These molecules included trimethylamine (TMA), which is also released by bacteria in raw seafood. 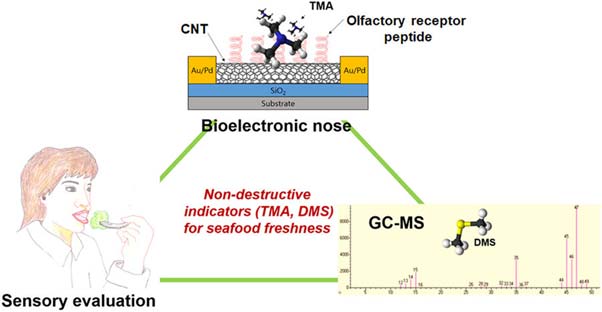 Much like GC/MS probes, the device can be used to analyze headspace. The researchers did this by exposing the device – which, with its bottom layer of silicon, looks somewhat like a computer chip – to the air samples.

The ‘nose’ worked by inducing a change in conductance in the carbon nanotubule, which was suspended between a source and drain, in response to conformational changes in the protein after it has bound to a molecule of interest (e.g., TMA).

This response was also expressed in ranges that corresponded to increasing concentrations of the target molecule, i.e., the 'nose' was able to detect odorants present in amounts as little as 10 femtomoles (fM).

The olfactory proteins were engineered to be highly specific for the target so that it would not also detect other molecules in the same size range.

The ‘nose’ required exposure to tiny samples of oyster, diluted in distilled water, to detect its target.

This protocol was tested against standard GC/MS. Also, expert human testers were hired, who can detect spoilage in seafood samples by smelling and assessing them for visual quality and desirability.

This panel was able to determine that samples of oyster stored at 4⁰C, since their harvesting, declined in quality with every day for six days. However, it took until the sixth day for the testers to decide that the seafood samples had deteriorated beyond edibility, in terms of smell, presentation and the willingness to taste.

A comparative correlation profile showing the number of days it took the ‘nose’ to detect respective measures of spoilage (TMA line on graph (a)), the GC/MS (DMS line on graph (b)) and the human testers (all other lines on both graphs). (Source: K. M. Lee, et al., 2018)

Therefore, it can be said that this new electronic 'nose’ device out-performs human testing in the determination of food quality and spoilage.

Similarly, the method was also found superior to GC/MS in detecting odorant levels, post-harvest, thus indicating that much lower concentrations of TMA can be detected compared to that of DMS detected using the standard method.

The authors of the paper, led by Shin Sik Choi of Mongyi University, further intend to develop their device for use in the seafood industry. The team asserts that their e-device can enhance the detection of dangerous bacteria, such as Pseudomonas and Vibrio species. These micro-organisms are among the long list of those that produce TMA.

As the consumption of raw oysters has led to epidemics, such as cholera in the past, this electronic 'nose' may end up making seafood safer for all of us in the future.

Top Image: Oysters are a seasonal treat or delicacy for many consumers. (Source: StockSnap @Pixabay)