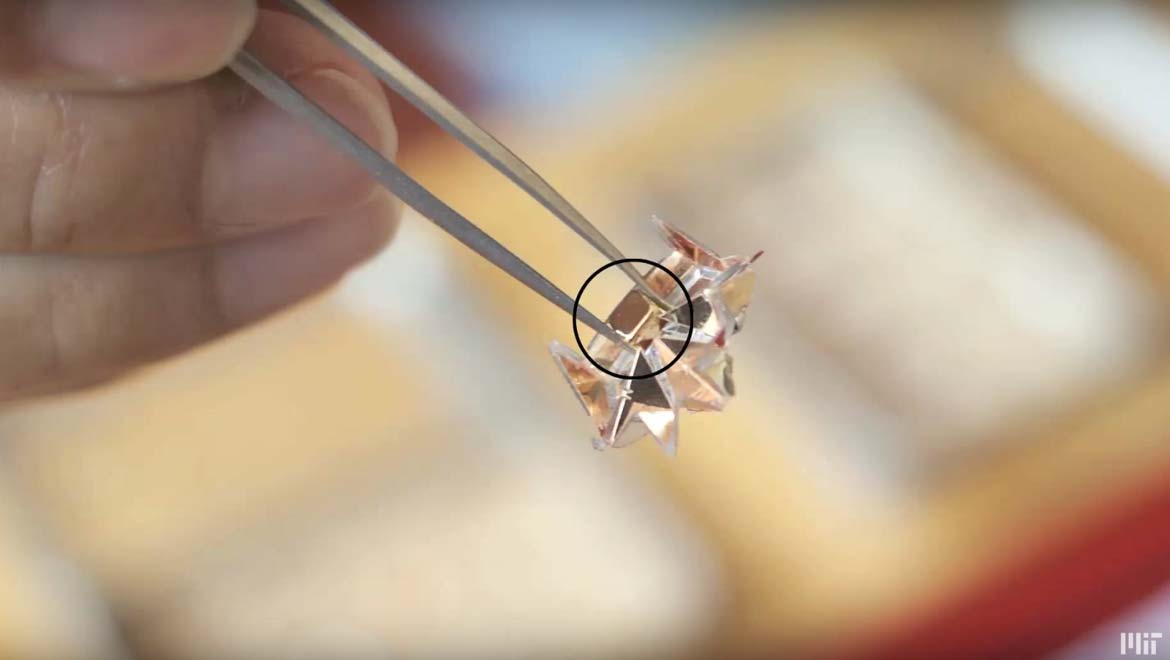 Kids accidentally swallow inedible objects a fair number of times and parents reflexively panic hoping for it to pass through the body soon and not get caught in the esophagus or gut, the waiting raising their anxiety levels! The United States records about 3,500 cases every year of hazardous button batteries, found in toys, watches etc, that are being ingested resulting in a detriment to the consumer’s health like chemical burning of tissues and sometimes even death.

Scientists at the Massachusetts Institute of Technology led by Director Daniela Rus of the CSAIL, aiming to provide a solution to the above problem, invented a tiny rectangular robot with compressible vertical folds and corners that when consumed performs the function of unfolding in the stomach, reaching out to the foreign item, gripping and finally removing it. True origami-style! Describing its exact locomotion inside the body, it is understood that the bot follows a rotational motion of sticking to the desired surface, carrying the article with its magnet and breaking free by redistributing its weight. On occasion, a pushing (for the acidic juices) action may also be performed. Being responsive to variable heat conditions, it also contracts and expands accordingly. The product, created mainly for the purpose of purging minuscule batteries that have been imbibed, is an untethered system that is controlled externally with the help of a magnetic field for navigation.

During test studies, a portion of a pig’s stomach, reconstructed using silicon, water and lemon juice, was used to replicate the human digestive system. A battery was inserted into this system and the origami robot satisfactorily latched on to and eliminated the article on stimulation by the controller.

Questions regarding the safety of its consumption were raised and to this, the makers at MIT reassured that the edible robot is harmless as the capsule within which it is enclosed is biologically safe and easily degradable, and edible too as it constitutes of a small magnet within sheets of dried pig intestine. Basically, picture a sausage! Also, the heat-sensitive materials used for its construction are made of the biocompatible, Biolefin.

The researchers of the meat-bot created this method that uses a non-invasive (compared to the use of cameras during endoscopy) yet promising technique and one that finds application in the area of healthcare and medicine which hopes to, in the future, heal stomach wounds and act as drug-carriers to injured parts of the body. One of the foreseeable challenges will be to develop a vegetarian/vegan-friendly model although news is that this is already work-in-progress. The next steps involve experiments to control the movement of the robot without the help of any outside forces but just by the use of sensors.