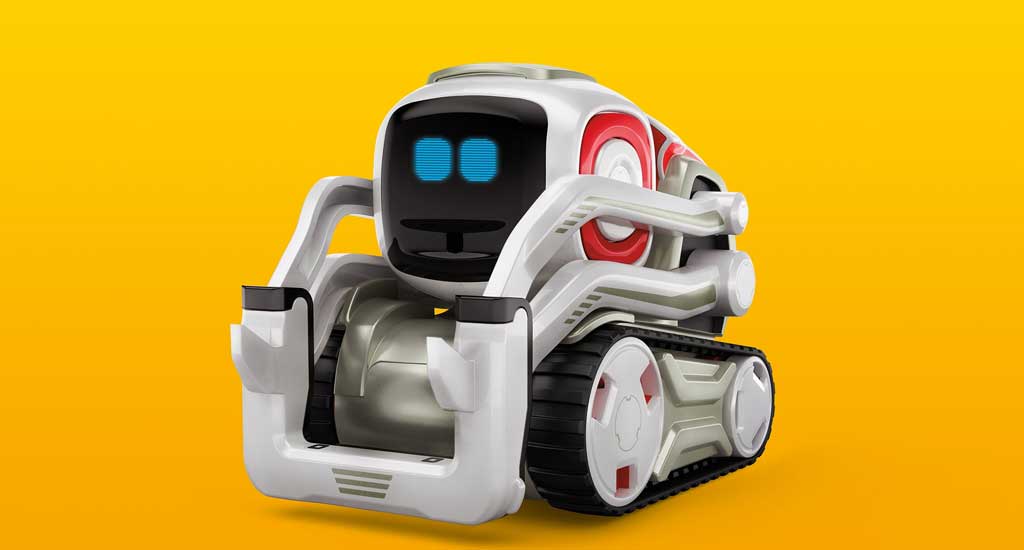 Scientists are constantly looking for inspiration when it comes to revolutionary ideas. For decades, Hollywood movies provided original and innovative material for technology industries. A San Francisco-based company named Anki, tried to steal a little bit of that Hollywood magic and bring it into our everyday lives. As a result, a tiny robot with a big brain and an even bigger personality was created. His name is Cozmo and he is a palm-sized robot, based on Pixar’s character WALL-E. He costs about $180 (£146.7) and is available for sale in the US since October 16th 2016. The package includes Cozmo himself, a charger and three interactive power cubes used for gaming.

Cozmo is designed to be your best friend rather than a personal assistant. He can recognize your facial features and remember your name. He is aware of his surroundings, which means that he uses path planning to maneuver his way around and avoid falling off a table. If he loses balance, he wiggles around until he is up again.

His main interaction with the user is through games, which he particularly loves. The games include Keepaway, where Cozmo tries to pounce on a sensor-imbued toy cube with his arm, and you race to pull it away before he can. Quick Tap is another game, where the blocks cycle through colors and when they match, you have to tap the blocks before Cozmo does. He is extremely competitive, so when he loses, he will get mad and pound the table.

Cosmo’s most original feature, that makes him one of a kind, is his charming yet unpredictable personality. He is able to react to a situation as a human would, with a wide range of emotions reflecting through his eyes. Like a child, if you don’t play with him for a specific amount of time, he’ll nudge your hand for attention. Other times he’ll look up in frustration. Cozmo will stack and then knock down his blocks when he gets bored.

Most of Cozmo’s computations do not happen on the robot’s internal hardware. Instead, he connects to an iOS or Android app, which communicates with Anki’s servers, that is why he is so light and small. The app’s home screen shows off a collection of daily goals and the amount of points you've earned through your play sessions. You'll use the points to unlock more apps and upgrades for Cozmo.

Cozmo’s features include blue LED eyes and his own robot voice. He interacts with the environment by using a single articulating arm and moves around with tank treads. There is also a camera that is placed below his eyes that helps him recognize people and his surroundings.

Cozmo can last for 60 to 90 minutes of playtime, depending on what you're doing. When his battery is drained, he goes to sleep and occasionally even snores.

Discover more as you play

His abilities develop the more you interact with him and he also gets smarter over time. According to reviews, the app allows you to unlock more skills for Cozmo by completing one of three daily goals, like you do with the AI-driven, smartphone-controlled toy cars that Anki is known for. Those include simple things, like letting Cozmo run around on your table for 10 minutes, or beating Cozmo at a game of "tap the cube". One of the most fun features on the app is a mode where you can see through Cozmo's camera.

It is clear that Anki’s founders and developers paid a lot of attention to even the smallest details of Cozmo's design and behavior. He definitely represents the next generation of robots and is a step closer to bringing them into our everyday lives. With his unique personality and user-friendly app, he is appropriate for users of every age. Anki guarantees hours of fun with this extremely smart robot and an inspiration for greater future projects.