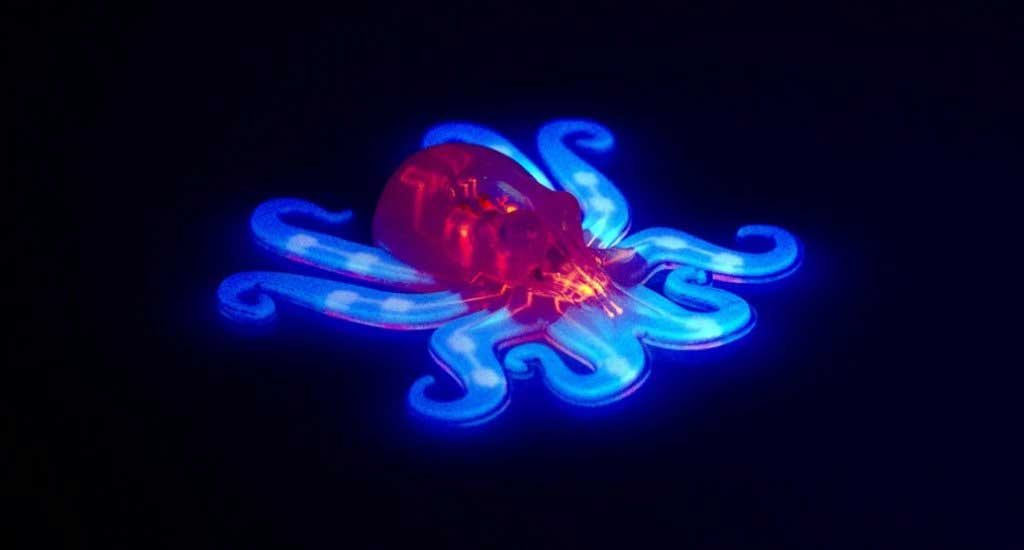 Scientists at Harvard University have demonstrated the first autonomous, untethered, soft robot. It is named “Octobot” and is a revolutionary idea in the field of robotics. It was named after the octopus, an animal that inspires scientists working on soft robotics, since it can use its arms with strength and dexterity despite having no internal skeleton. Until now soft robots existed only in theory since electric power and control systems such as batteries and circuit boards are rigid. These components need to be replaced by soft systems in order to create a simple design before moving to machines of greater complexity. Soft robots could change the way humans interact with robots.

The creation and function of Octobot

The research is described in the journal Nature, and was led by Robert Wood and Jennifer A. Lewis, both distinguished members of the Wyss Institute for Biologically Inspired Engineering at Harvard University. They and their highly qualified team designed Octobot, a palm sized robot powered by gas. Octobot is unlike previous robots that had been either tethered to an off-board system or filled with hard components. A chemical reaction between hydrogen peroxide and platinum takes place inside the silicon body of the robot, a reaction that creates gas that causes Octobot’s arms to inflate, just like a balloon. The gas flows through a series of 3D-printed pneumatic chambers that link the octobot’s eight arms.

The choice of these two chemicals was not random. The simplicity of the reaction between hydrogen peroxide and platinum, a chemical and a catalyst, allowed the team to replace rigid power sources. A microfluidic logic circuit placed inside the robot is able to control the moment of the reaction, hence when the hydrogen peroxide will decompose to gas.

Each and every functional component in the soft body of the Octobot, such as the fuel storage, is 3D-printed. According to the creators of this unique robot the fabrication is a quite easy process. It only involves three methods of fabrication, soft lithography, molding and 3D-printing.

What the future holds

Octobot moves without being wired to a computer and for now it is just able to float on water. The octobot’s fuel lasts between 4 and 8 minutes, and it can’t steer in any particular direction. In the future, the team hope to design a soft robot that can crawl, swim and interact with its environment. The interaction will be possible by adding sensors to Octobot’s body. With the sensors it will be able to recognize an object in its environment and move accordingly, either choosing to approach or to avoid it. Another issue is the capacity of the fuel inside the robots body. In the future it can be increased or decreased according to what we want the robot to perform.

It still misses sensing and programming abilities, as mentioned, yet this team has proved that an entirely soft robot is not just a piece of imagination but it can actually be built. Octobot is simple as far as design is concerned but it created a base on which scientists can work to improve it. It is definitely not a small thing to achieve.

Robotics is a field that offers us new, revolutionary ideas daily. It is at its peak and this specific type of robotics, soft robotics, may be the future. They will be used in many aspects of life such as for marine search and rescue, oceanic temperature sensing, and military surveillance. There are still many impressive things ahead of us and Octobot sure set the bar high enough.