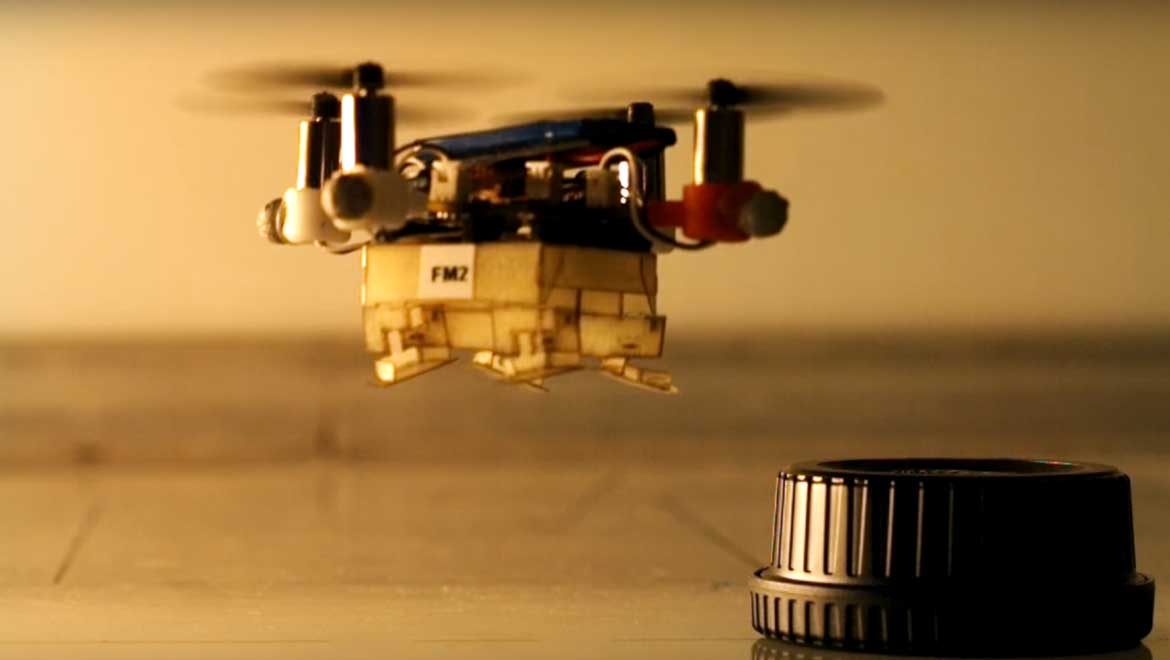 Picobug: A Tiny Robot That Can Walk, Fly and Grasp

Robots are getting more and more advanced but it’s generally accepted they have yet to match up too many of their natural counterparts. The GRASP Laboratory at the University of Pennsylvania intend to change all that. Led by Vijay Kumar, the team have created a tiny robot inspired by the stag beetle.

As well as being able to fly and crawl, stag beetles have large mandibles to grasp things and defend themselves. Despite being inspired by a beetle, this little robot’s full name is the picobug, but it’s also been nicknamed the flying monkey. From videos published by the lab showing the little robots nimbly darting around the lab, it’s easy to see why.

The lab has designed the picobug to be multi-modal, basically meaning it possesses more than one mode of locomotion. If you think about species in nature that have this ability they are often abundant – bugs and birds being two perfect examples. Picobug achieves its multi-modality through four independent rotors for flight, and a lightweight, origami inspired walking mechanism. The four rotors work together in what is known as ‘quadrotor aircraft capabilities’. The ability to walk is powered by a single motor, and is what is known as ‘single-degree-of-movement’. This basically means that the robot can move in one direction only: forwards.

You might think that this lack of fine directional control would limit the usability of picobug but the designers have very cleverly got around this potential problem by using the four rotors to provide additional steering capabilities. Picobug uses the yaw from the rotors to control the direction of travel. Very simply put, yaw from the rotors changes the direction that picobug is travelling in, so it’s capable of moving left and right at the same time as it’s moving forwards. This means that the robot can complete a variety of complicated maneuvers including circles, figure of eight shapes and locating a target from a wide variety of locations.

Artificial Intelligence (AI) trajectory tracking means that picobug can switch from crawling to flying and back again independently, so if it happens to encounter an obstacle as it’s crawling along, it can simply take off to clear the obstacle before landing to continue its journey. Another fantastic advantage of having two different modes of movement is that picobug can save energy by switching to a different mode, thus increasing the time it can be out successfully completing missions.

Picobug weighs only 30g and measures about the size of a grapefruit. Currently, Picobug can fly at a maximum velocity of 5 meters per second, and crawl at 0.16 meters per second. It has a flight time of 6 minutes and crawl time of more than 45 minutes. The small size of picobug, along with its multi-modal capabilities are a great advantage in exploring environments that other robots, or humans, would simply not be able to reach. Picobug can crawl through confined spaces such as small tunnels, before transitioning into flight upon exiting the tunnel. This has implications for the exploration of sites such as explosions at nuclear reactors, or disaster zones inaccessible by foot.

An additional advantage of picobug is its relatively cheap assembly costs. This means that the robot can be sent to places without worrying about retrieval. It’s very likely the picobug can be equipped with the ability to deploy cameras or audio sensors at site, or even beam back surveillance pictures to a ground team at some distance from the site.

Current research is focusing on swarming the picobugs, and increasing their capabilities of navigating in cluttered 3D environments. Similar to bees swarming in their hives, they often bump into each other and are shunted off course but are able to return to their original flight pattern with minimal disruption.

Once the gripper mechanism has been refined, the design team hope to ‘teach’ picobugs to latch onto each other, and fly as a team. This means that they can accomplish tasks they couldn’t on their own. This is very reminiscent of the nature that inspired picobug: picture a swarm of ants acting together to accomplish goals greater than they could ever achieve alone.

Possibilities for this little flying monkey abound, so who knows, you may well see them in the skies above you in the not too distant future.