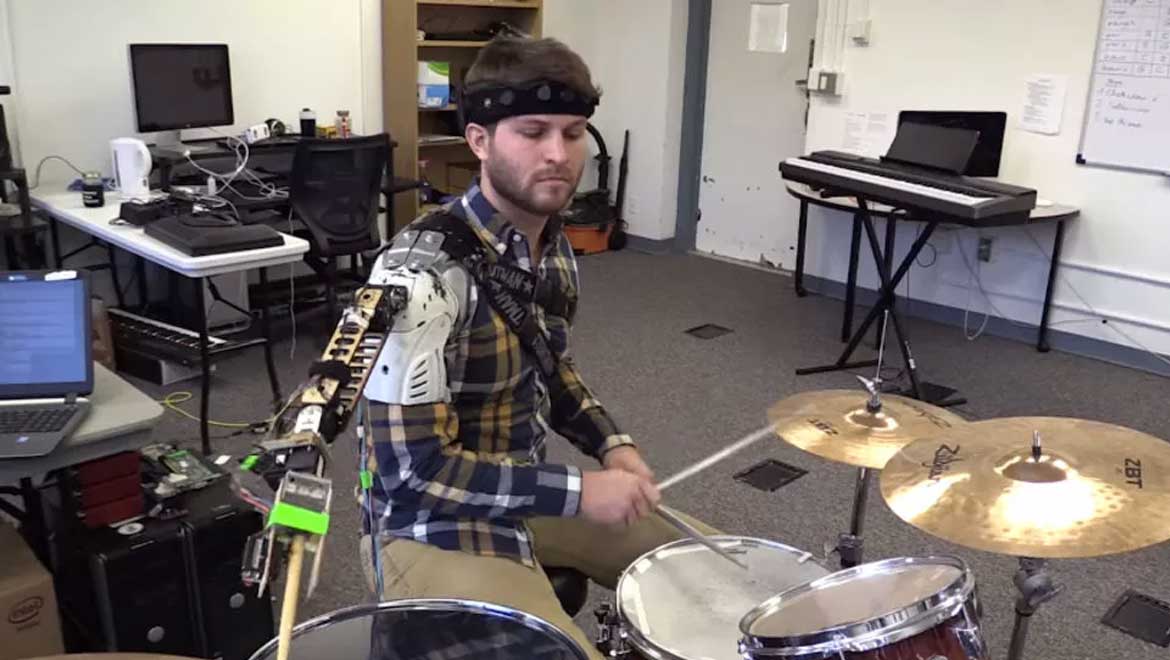 What would you do with a third arm? Some personal favorites would be using a phone while typing on a computer, holding a mirror while cutting my own hair, and doing push-ups while eating a donut. While the idea of me doing push-ups is implausible, having a third arm that is fully controllable and articulated is very real. Investigators at Georgia Institute of Technology have created a robotic third arm that attaches to a subject’s shoulder and responds to human gestures. The two-foot long “smart arm” was demonstrated by a drummer, who was able to move the arm between the cymbals and the drums while keeping a beat.

Professor Gil Weinberg has worked in both music and robotics for many years and established the program in Music Technology. His goal is to expand musical expression, learning, and creativity through the use of technology. He had previously built a robotic band, but in 2014 he expanded into making a robotic drumming prosthesis.

A local Atlanta drummer was electrocuted and had his right arm amputated below the elbow. Not content with his prosthetic, he built his own device for drumming but found using it was not optimal. By pivoting his elbow he was able to smash a drumstick on a drum but he didn’t have the fine motor dexterity to control the bounce of the stick. When it comes to music, milliseconds count; just the slightest offset on drum beats gives a noticeable change. Weinberg stepped in and created a single-stick prosthetic that allowed the drummer to adjust his grip on the drumstick by flexing his bicep. The sound quality was immediately different.

But Weinberg didn’t stop with just one stick. The roboticist had previously built a robot marimba player that incorporated computing algorithms to improvise human percussion. Weinberg added a second drumstick to the prosthesis, a stick that had a “musical brain”. The drummer can have the second stick play on its own or not at all. The embedded chip controls even allow for drumming that is faster than humanly possible.

What’s better than having two sticks on hand for a drummer? How about an entire third arm? Wanting to push the limits of what humans can achieve, Weinberg set out on building and entire arm. The arm is situated on the drummer’s shoulder and by a simple gesture will bend down and reach for cymbals or drum depending on the need.

Dubbed a smart arm, the added appendage incorporates listening devices and the musical brains from the double-stick prosthetic. The arm actively listens to the music and will improvise based on the rhythm. The arm will follow along with the drummer’s tempo. The arm is also aware of its position, the position of drums, and the proximity to the drummer’s arms. With this knowledge, the arm knows to strike the drums parallel to the playing surface. The arm will articulate itself up or down between the drums and cymbals.

Weinberg lauds the smart arm as it is able to produce richer performances. Drumming is not just well timed smashing of sticks on the drum surface, there are 40 drum rudiments that are the foundation for drumming. Rudiments include rolls, bounces, and drags among others. Rudiments are pieced together like words are put together to make sentences. With a third drumming arm, there is a potential to combine complimentary rudiments to generate new variations never heard before.

For the next step, Weinberg would like to link the arm’s movements with brain activity. Experimenting with electroencephalogram headbands, the research team detects and monitors the drummer as they play. The team wants to identify patterns that will allow the arm to predict what the musician is playing. Of course, Weinberg acknowledges that the arm can have a variety of uses outside of music, but notes that music is very time and spatial dependent, requiring precise movements at defined intervals and the arm is very good at performing these types of tasks.

Top image: Playing the drums with the extra arm. (YouTube) 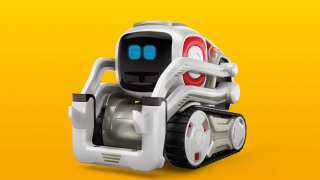