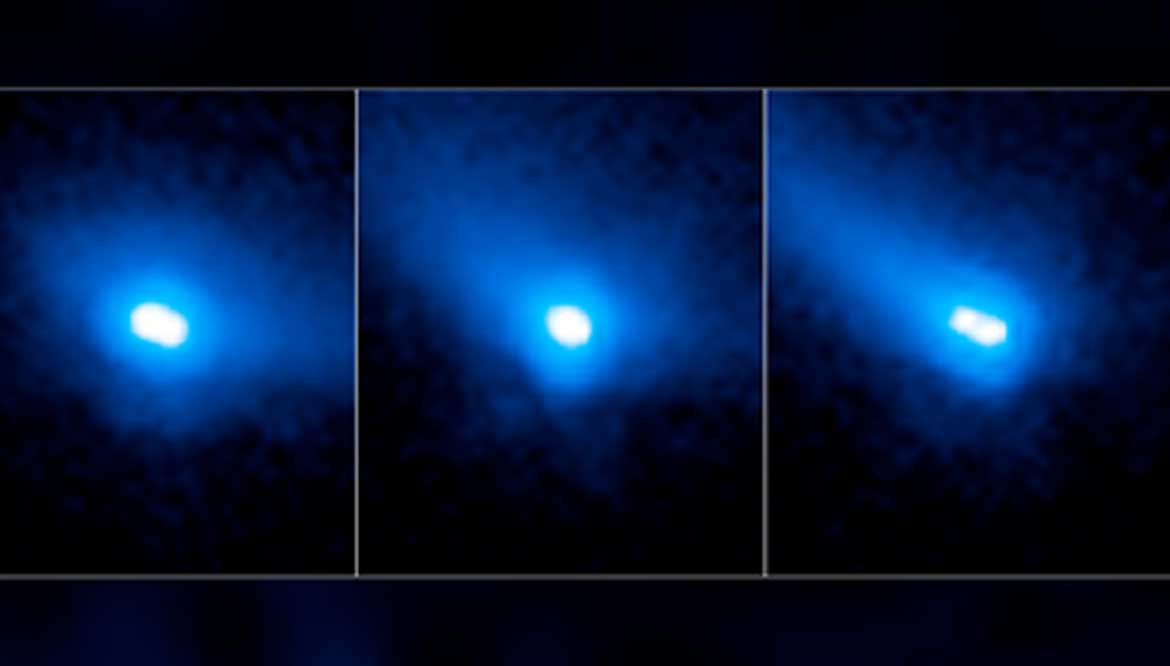 The Hubble space telescope has identified many objects in our solar system, with one of its recent missions to help astronomers discover more about a mysterious object in the asteroid belt between Mars and Jupiter. At first glance, this object appeared to be two asteroids orbiting each other, and was assigned as such. But further observations revealed that it also possessed characteristics in keeping with a comet. Astronomers knew that this meant they needed to take a much more detailed look.

In their paper published this week, Hubble has once again helped astronomers gain even more of an insight into this rare asteroid comet hybrid.

NASA’s Hubblesite defines comets as “a loose collection of ice and dust that fall in toward the Sun from beyond the orbits of the major planets, and grow long tails of dust and gas along the way.” Asteroids, on the other hand are defined as being “rocky or metallic and are relegated to a zone between Mars and Jupiter.”

So, which was this object? As mentioned previously, asteroid as it was known then, named 300163 (2006 VW139) was first discovered back in 2006 by Spacewatch. The distinctive tail, which clearly marked it out as a potential comet was first noticed in 2011 by Pan-STARRS, after which the asteroid was also given a comet reference number of 288P. Both Spacewatch and Pan-STARRS are survey projects run by NASA’s Near Earth Object Observations Program.

The more recent research released this week has now shed light on this mysterious object, which defies convention by possessing the characteristics of both asteroids and comets. Known as main-belt comets, these are a rare find, with only around twelve having been identified so far. What sets this main-belt comet even further apart from all the rest is that it’s in two parts, which orbit each other around 100 kilometres (60 miles) away from each other.

Because this hybrid comet/asteroid is so unusual, astronomers have been keen to take a closer look at it, and used to Hubble space telescope to do so, as the object passed close to the Sun. The research, using the images from Hubble, was led by Jessica Agarwal, from the Max Planck Institute for Solar System Research, based in Germany.

Hubble took images of the asteroid in great detail, which allowed Agarwal and her team to confirm the comet-like characteristics, including a nucleus and tail.

Their paper, titled ‘A binary main-belt comet’ was published in the journal Nature on September 20. Of the research, Agarwal said: “We detected strong indications for the sublimation of water ice due to the increased solar heating – similar to how the tail of a comet is created."

The astronomers estimate that the asteroid spilt in two around 5000 years ago, possibly due to the stresses of rotation. The vapour being released from the two separate pieces then probably helped to push them further apart. Agarwal said that: “Surface ice cannot survive in the asteroid belt for the age of the Solar System but can be protected for billions of years by a refractory dust mantle, only a few metres thick.”

Discovering more about how main-belt comets formed, and where they originated from, is key for astronomers to understand more about our Solar System, including the existence of water on planets such as our own Earth.

But, as Argwhal says: "We need more theoretical and observational work, as well as more objects similar to this object, to find an answer to this question.”