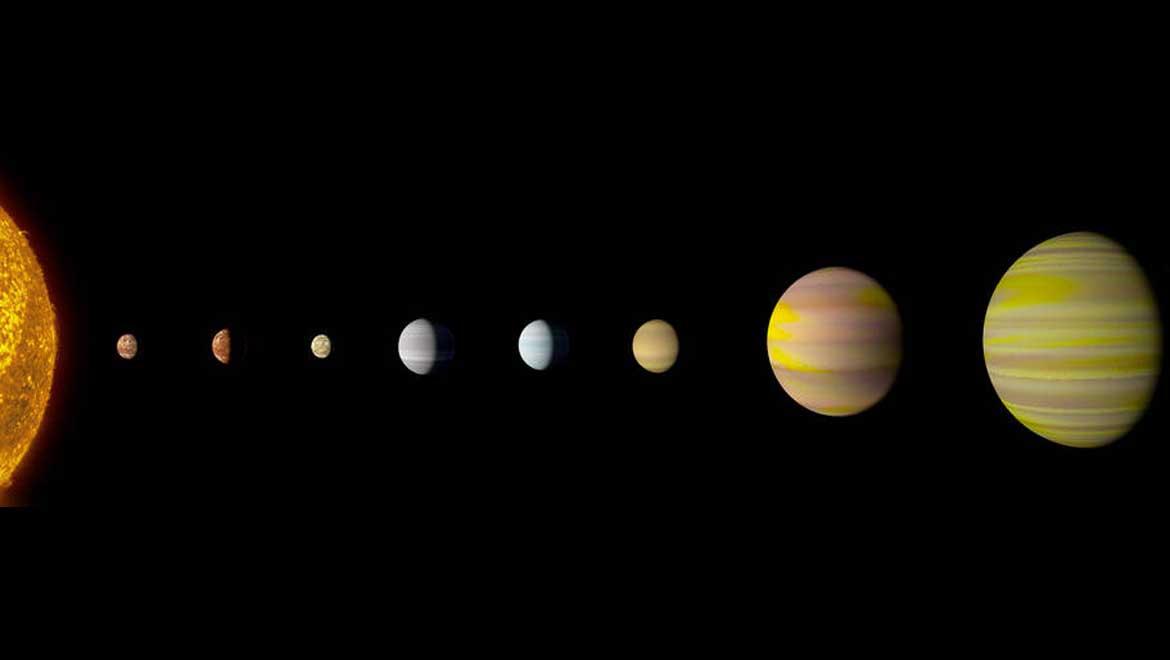 NASA’s hotly awaited teleconference last night didn’t reveal the existence of alien life, as some had hoped for against all odds, but it did reveal something just as exciting:

A solar system with as many planets as our own.

The solar system in question orbits a huge star known as Kepler 90, which is located in the Draco constellation, around 2,500 light years away from Earth.

The announcement centered on the discovery of an eighth planet with the system, the presence of which had previously been missed. In a collaboration with Google and using machine learning, the weak signals pointing to the existence of this planet, now named Kepler 90i, were detected.

Of the discovery, Paul Hertz, director of NASA’s Astrophysics Division based in Washington, said: “Just as we expected, there are exciting discoveries lurking in our archived Kepler data, waiting for the right tool or technology to unearth them. This finding shows that our data will be a treasure trove available to innovative researchers for years to come.”

The ‘tool’ he is referring to in this instance is machine learning, the use of which was organized in collaboration with Google.

Christopher Shallue, a senior software engineer based within Google AI, was responsible for the decision to apply a neural network to the huge treasure trove of data that has been collected by the Kepler space telescope over the years. Neural networks are a type of Artificial Intelligence inspired by the way neurons in our own brains connect.

After finding out that the amount of data collected by Kepler is so large that it will take years for astronomers to sift through manually, even with the help of citizen science projects such as Galaxy Zoo, Shallue and colleague Andrew Vanderburg set about creating a neural network to help.

Of his decision to focus on the Kepler data, Shallue said: “In my spare time, I started googling for ‘finding exoplanets with large data sets’ and found out about the Kepler mission and the huge data set available. Machine learning really shines in situations where there is so much data that humans can't search it for themselves.”

To do this, they trained a computer to analyse the data collected by Kepler.

Whilst machine learning has previously been applied to the Kepler data, this was the first time that a neural network has been used.

The Kepler space telescope, launched by NASA in March 2009, is equipped with a photometer, which continuously records the brightness of over 145,000 different stars in the Milky Way. The key within this data is a regular cycle of the star dimming and then becoming brighter again. This indicates that there are planets orbiting the star, just as we orbit the Sun.

In a NASA press release, more detail was provided about how the neural network was set up:

“First, they trained the neural network to identify transiting exoplanets using a set of 15,000 previously-vetted signals from the Kepler exoplanet catalogue. In the test set, the neural network correctly identified true planets and false positives 96 percent of the time. Then, with the neural network having "learned" to detect the pattern of a transiting exoplanet, the researchers directed their model to search for weaker signals in 670 star systems that already had multiple known planets. Their assumption was that multiple-planet systems would be the best places to look for more exoplanets.”

And it was a success.

Using their neural network, Shallue and Vanderburg discovered the presence of an eighth planet orbiting Kepler 90 – identified by a weak signal which had been previously overlooked. In the research paper detailing the discovery, Shallue and Vanderburg say that: “Our discovery of an eighth planet brings Kepler-90 into a tie with our own Sun as the star known to host the most planets.”

“These results demonstrate the enduring value of Kepler’s mission. New ways of looking at the data – such as this early-stage research to apply machine learning algorithms – promises to continue to yield significant advances in our understanding of planetary systems around other stars. I’m sure there are more firsts in the data waiting for people to find them.”

Top image: With the discovery of an eighth planet, the Kepler-90 system is the first to tie with our solar system in number of planets. Credits: NASA/Wendy Stenzel

previous article
Underneath an icon cracks the literal criterion
next article
Black Holes: Not That Attractive After All?