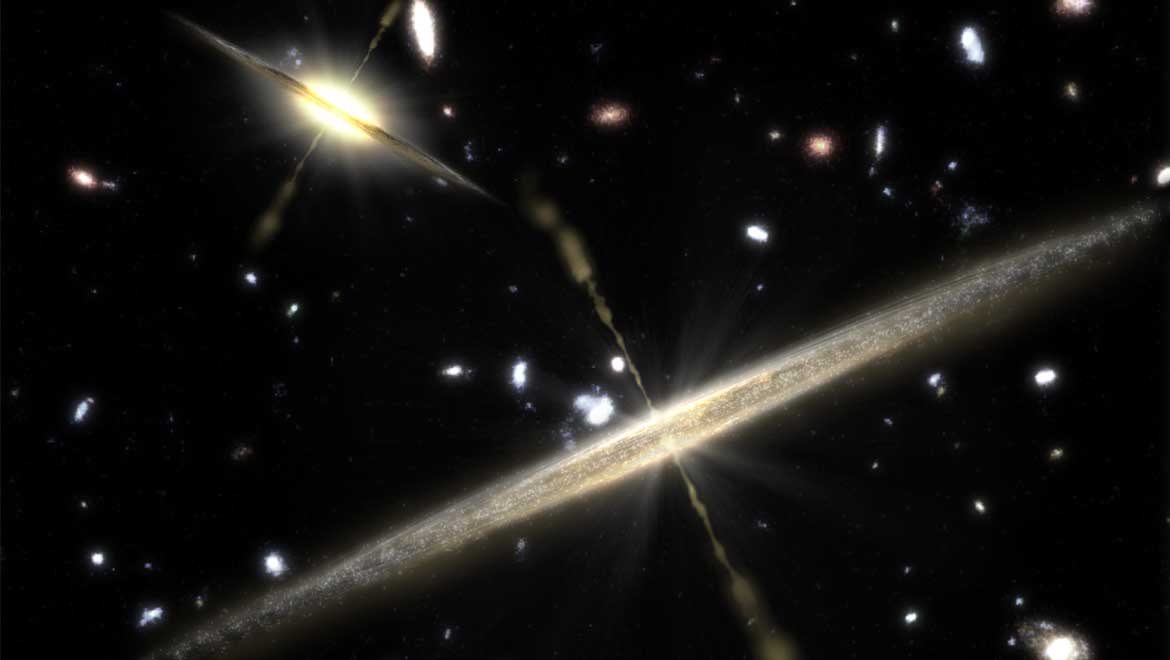 Scientists have just released details of the incredible discovery of 72 previously unobserved galaxies, lying in one of the most studied areas of space, the Hubble Ultra Deep Field (HUDF).

The galaxies were identified with the newly launched Multi Unit Spectroscopic Explorer (MUSE), which is part of the European Southern Observatory’s Very Large Telescope (VLT) based at the Paranal Observatory in Chile.

The area of space where the galaxies have been found is known as the Hubble Ultra Deep Field (HUDF). Despite the fact that the HUDF is a very well observed area, the recently discovered galaxies weren’t previously visible because they are what is known as lyman-alpha emitters. This means that they emit only one colour of light, called Lyman-alpha light. So, until the advanced technology behind the MUSE instrument became available, they were literally undetectable.

The MUSE instrument is very different to other telescopes used to study the HUDF, because it uses spectroscopy. As Roland Bacon, head of the HUDF Survey Team and co-author of the study, explained in a press release: “MUSE can do something that Hubble can’t — it splits up the light from every point in the image into its component colours to create a spectrum. This allows us to measure the distance, colours and other properties of the galaxies we can see – including some that are invisible to Hubble itself.”

Jarle Brinchmann, co-author, from the University of Leiden in the Netherlands and the Institute of Astrophysics and Space Sciences at CAUP in Porto, Portugal, said: “MUSE has the unique ability to extract information about some of the earliest galaxies in the Universe — even in a part of the sky that is already very well studied. We learn things about these galaxies that is only possible with spectroscopy, such as chemical content and internal motions — not galaxy by galaxy but all at once for all the galaxies!”

The study, titled ‘The MUSE Hubble Ultra Deep Field Survey’ was published in a special edition of the journal Astronomy and Astrophysics, covering ten different scientist papers which have all used datasets from MUSE surveys.

Discoveries such as these galaxies also drastically improve our chances of finding extra-terrestrial life. The website Futurism notes that these galaxies may host up to 57.6 trillion planets, and who knows whether one of those could be habitable?

This is another jewel in the crown of scientific studies made possible with the VLT. The European Southern Observatory (ESO) state that the VLT is the ‘most productive individual ground-based facility in the world’ which has facilitated many discoveries including the first images of an extrasolar planet and allowing the tracking of stars around the black hole at the centre of our own galaxy.

What’s even more exciting is that MUSE has even more capabilities which have yet to be exploited. Roland Bacon stated that: “Remarkably, these data were all taken without the use of MUSE’s recent Adaptive Optics Facility upgrade. The activation of the AOF after a decade of intensive work by ESO’s astronomers and engineers promises yet more revolutionary data in the future.”

It certainly looks as though, thanks to MUSE, the future is bright for those scientists studying these galaxies which have just revealed themselves to humanity for the first time.

Top image: This artist's concept illustrates the two types of spiral galaxies that populate our universe: those with plump middles, or central bulges (upper left), and those lacking the bulge (foreground). (NASA)