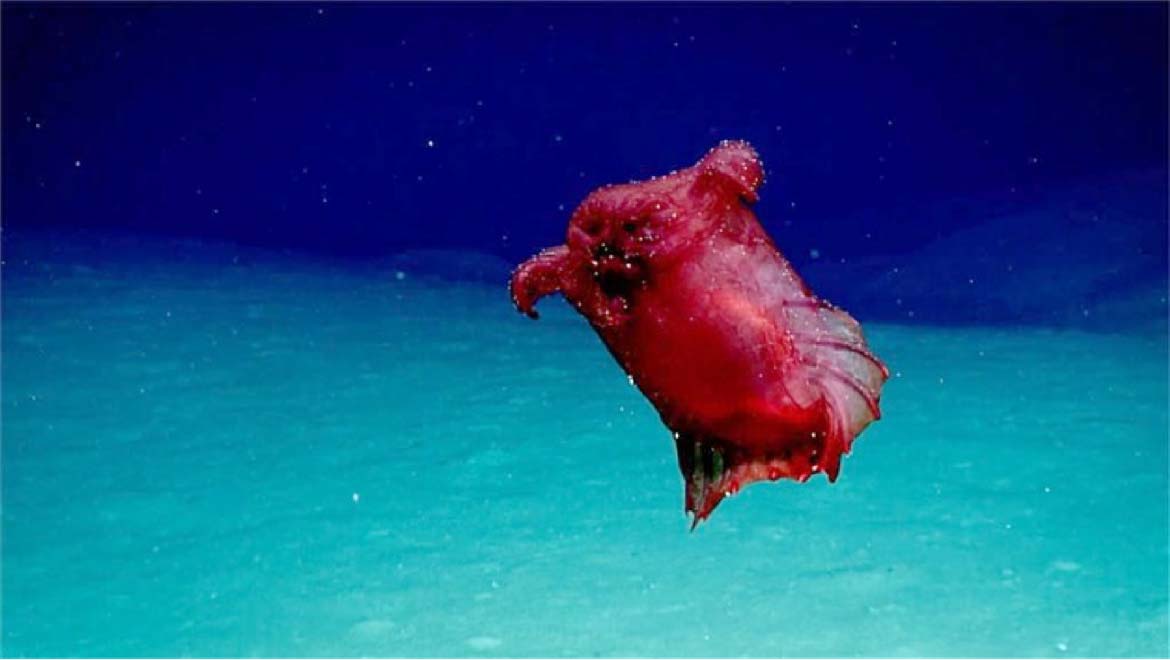 A creature whose name translates to the "headless chicken monster" was the most recent sighting of rarely-seen creatures, off East Antarctica in the waters of the Southern Ocean.

Expanding camera technology has allowed us to explore tremendous possibilities in every field of research. Now, the technology developed by Australian researchers has shed some light on the deeper parts of the ocean and exactly what lies in the dark.

The "headless chicken monster" has been seen only one other time in the Gulf of Mexico, according to Australia's Department of Energy and Conservation.

But this time, the creature was recorded during a project, using advanced cameras, to understand the effects of long-line fishing on species that live in deeper parts of the ocean. This is the very first time it has been filmed in the Southern Ocean close to East Antarctica.

Australian Antarctic Division (AAD), a part of Australia’s Department of the Environment and Energy, has created an underwater camera for commercial long-line fishing. The technology is based on a housing which protects the camera and electronics, and it is "designed to attach to toothfish longlines in the Southern Ocean, so it needs to be extremely durable," said AAD leader, Dirk Welsford, referring to a type of line used for deep sea fishing.

Dr. Welsford also mentioned that the cameras captured important data, which is being fed into the international body managing the Southern Ocean, the Commission for the Conservation of Antarctic Marine Living Resources (CCAMLR). "We needed something that could be thrown from the side of a boat and would continue operating reliably under extreme pressure in the pitch black for long periods of time."

Dr. Welsford said other CCAMLR nations such as Chile, France, and the United Kingdom were also using the super-strengthened devices, which are being designed at the AAD’s headquarters in Tasmania. “It’s a really simple and practical solution which is directly contributing to improving sustainable fishing practices,” he added, in a statement released by AAD. 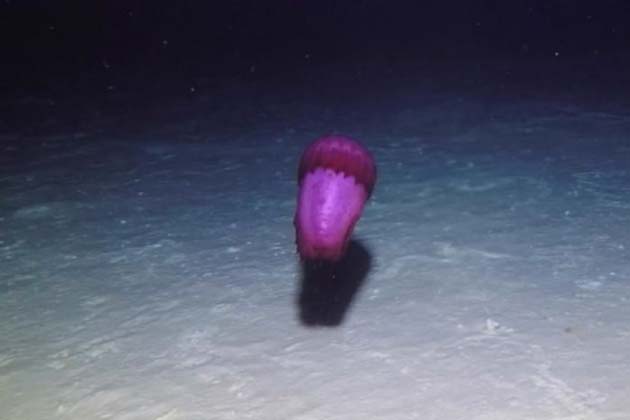 The AAD camera caught sight of the creature off Heard Island. (Source: AAD)

Which one is the “headless chicken monster?”

Sea cucumbers, like the Enypniastes eximia, are known to be found in every stretch of ocean, from seabeds just a few feet below sea level to depths miles below the surface. They are close relatives to the starfish and sea urchins, and they spend most of their time wandering along the seafloor, searching for small food items including plankton, algae, aquatic invertebrates, and waste particles.

Sea cucumbers, particularly eggs and young larvae, are prey for fish and other marine animals. They are also enjoyed by humans, especially in Asia, and some species are farmed as delicacies.

When threatened, some sea cucumbers discharge sticky threads to ensnare their enemies while others can mutilate their own bodies as a defense mechanism. They violently contract their muscles and jettison some of their internal organs out of their anus. The missing body parts are quickly regenerated.

Welsford was quoted saying, in a statement, issued by CCAMLR, "Some of the footage we are getting back from the cameras is breathtaking, including species we have never seen in this part of the world." He added, "Most importantly, the cameras are providing important information about areas of seafloor that can withstand this type of fishing and sensitive areas that should be avoided."

The data collected from the cameras are being presented at the annual CCAMLR meeting starting in Hobart, a few weeks back, where a new maritime protection area will be proposed.

"Australia will again be seeking support for the creation of a new East Antarctic Marine Protected Area," said Gillian Slocum, Australia's CCAMLR Commissioner. "We will also support two other new Marine Protected Areas (MPAs) being proposed this year which will contribute to CCAMLR's commitment of a representative system of MPAs in the Southern Ocean," she added.

The huge area off the coast of East Antarctica, which is rich in cold-water corals and home to penguin foraging grounds, has long been the focus of a bid to create a protected area.

The proposal to protect three large blocks of ocean and seafloor along East Antarctica has thrice been endorsed by the commission's scientific committee. But opposition from China and Russia has blocked the proposal each year, according to a report in Nature. These objections were about the language and regulations of the proposal rather than its conservation justifications and science.

The report added that both countries have fishing interests in the region, and under CCAMLR rules, all 25 commission members -- 24 countries and the European Union -- must agree for a proposal to be adopted. However, conservation groups are confident that the zone will be agreed to at this year's meeting.

"Many changes have been made to the original proposal to address concerns by countries. Almost all CCAMLR Members have agreed it is ready to be adopted," said Claire Christian, executive director of the Antarctic and Southern Ocean Coalition. "We are therefore optimistic that any remaining concerns can be addressed."

Christian also stated, "Marine protected areas are one of the best tools we have to protect whole ecosystems in a comprehensive way. Protecting the Southern Ocean means we protect the world's last great wilderness and help its magnificent species thrive."

CCAMLR Commissioner, Slocum, added to this and said that the area's species were highly prized and thus needed careful conservation. "The Southern Ocean is home to an incredible abundance and variety of marine life, including commercially sought-after species, the harvesting of which must be carefully managed for future generations."