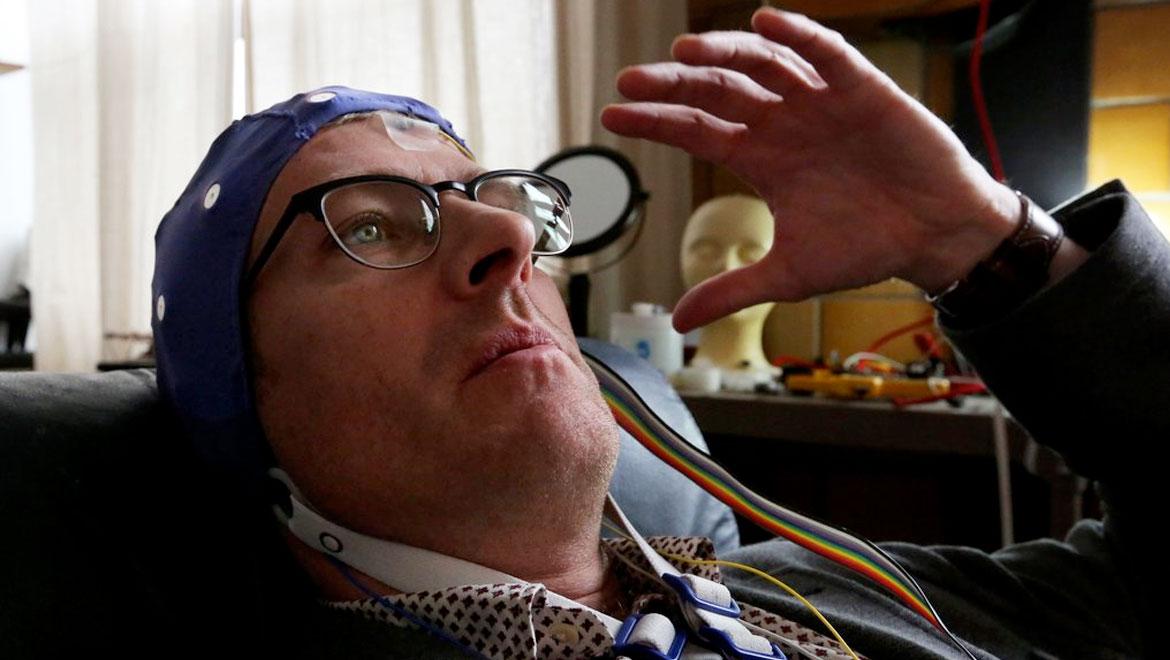 Electroencephalograms (EEGs) are a relatively well-established way of analysing brain activity. They use non-invasive sensors that detect the electrical activity of this organ through the skull. They then represent this activity in graphical forms than can be recorded, stored and used by people such as medical professionals. EEGs have been observed to be reliably associated with the brain activity they are supposed to visualise. Many normal, healthy brain regions even produce reproducible EEG feedback patterns, or frequencies. An example of this is the posterior dominant rhythm (PDR) produced by parts of the brain involved in visual processing or control. Similarly, people suffering from conditions such as stroke or chronic pain may also exhibit characteristic wave- or pattern-forms.

As a result, it is possible to control the patterns of certain EEG readouts by harnessing the activity in particular regions of the brain, for example by concentrating on one specific thing, thought or activity. This ability is put to use by modern-day medical science in the form of ‘biofeedback’ therapies, in which patients use EEG readouts to visualise an episode of their particular condition, such as the onset of pain, which enhances their perceived ability to control it, and also provide cues to use techniques they have learned to manage their illness. The patient employs these techniques until they see a response through the return of EEG readouts to those corresponding to more ‘normal’ patterns.

EEG may also form the basis of other devices that help the user control the environment in a hands-free manner. This is potentially useful for people who have lost some or all independent mobility. These devices, sometimes known as brain-computer interfaces, depend on predictable fluctuations in EEG waves to signal computerized tools to change or move in some way. Examples of these, which have been tested in recent research and development studies, include mouse cursors and typing programs. Therefore, EEGs may help disadvantaged patients to communicate and be productive in a variety of ways. Similarly, EEG signals may translate to the ability to move sophisticated prostheses.

EEG-powered brain interfaces could be even better facilities if they were able to be transduced into other media besides those of a visual nature. This would allow people in need of them to communicate in a variety of ways. Some recent research has shown that EEG-driven devices may be used to select musical tracks, select different styles, and control a musical passage to a certain degree. This form of research has also been applied to the study of how different emotions drive preferences in the selection of different styles and types of music.

Playing Music with the Mind

A team of researchers from the School of Music, Department of Neurology and Department of Neurosurgery at the University of Washington in Seattle decided to test the ability of EEG patterns to control an artificial piano, which they named the ‘Encephalophone’. First, they matched certain frequencies to a range of signals, which were converted to a scale on the Encephalophone. The team, led by Dr. Felix Darvas, then found that 15 participants who had no previous experience with or knowledge of the system were able to hit specific notes on the ‘keyboard’ when hooked up to EEG sensors.

This study suggests that EEG-powered impulses can in fact control hands-free instruments. Conversely, it shows that EEG can also be used to discover which frequencies are most likely to control virtual, or actual, devices. The team found that frequencies in the PDR rhythm of the visual cortex were most strongly associated with the control of the Encephalophone, compared to those of the mu rhythm of the motor cortex. This was due to the connection of PDR rhythms to eye movements, whereas mu rhythms involve no movement at all.

EEG and the Future

EEG-powered assistive devices have demonstrated great promise and potential for those with movement disorders or deficiencies. The work of Dr. Darvas and his team also indicates that it may be used to help these people recover at least some ability to communicate and express themselves. Drawbacks to the application of EEG to these industries remain, however, not least that innovations such as the Encephalophone are still in the early stages of development. In addition, this experimental instrument appears to depend on eye movement to function properly. That may not be ideal for those who hope for purely thought-controlled instruments or interfaces of other kinds. However, previous work in this area has shown that mu rhythms can be compatible with, and used to control, other artificial instrument types. Interfaces such as these also need much more testing involving people with motor disorders and conditions, rather than healthy volunteers, in order to become viable treatments or products.

EEG is a well-established and relatively cost-effective method of movement-independent computer manipulation. It also has the advantage of being non-invasive and reproducible across many users. In addition, EEG signals can also be augmented by other forms of sensors that detect neurological activity through skin or the scalp. These include skin response galvanometry, which is used to measure mental stress or emotional responses through the electrical conductance of the skin. In addition, voluntary eye movements can also be analysed directly to contribute to this type of data. Therefore, EEG, alone or in combination with other types of non-invasive neuro-feedback, can offer a whole new range of brain-computer interfaces for the rehabilitation, treatment or even recreation for people with conditions such as Amyotrophic lateral sclerosis (ALS), limb loss or various neuromuscular disorders.

Top image: Neurologist and musician Thomas Deuel, wearing a wired-up electrode cap, is working at the UW to research brain activity in musicians and is further developing the encephalophone for people with limited motor ability so they can play by thinking. There’s a patent pending on the process. (Alan Berner/The Seattle Times)