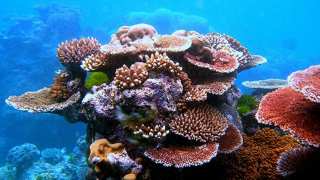 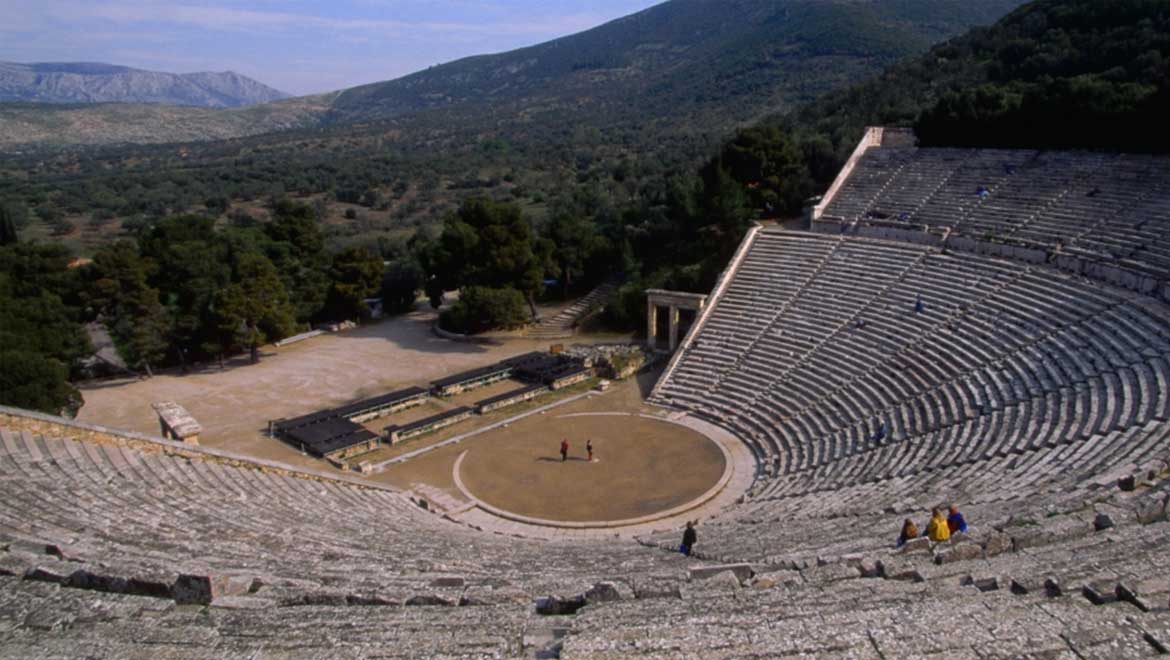 Unraveling The Acoustics Of Ancient Amphitheaters

Today, we take for granted the nature of theatrical plays and music concerts being staged in pre-arranged spaces. We also accept that performers enact well-defined roles specified by the plot, or as per artistic rules.

However, such conventions were formulated during ancient times in Greece as an evolution from religious festivals and ritual ceremonies, originally staged on the streets, in large spaces and open arenas. Possibly around the 12th century, during the Minoan and archaic times, such ritual ceremonies started to be hosted in specially adapted and constructed open spaces.

During the following centuries, after this early period, such public spaces progressively evolved into the properly-designed open amphitheatric form that appeared after the 6th century BC. This is the age that saw the evolution of organized cities, the birth of democracy, the flourishing of philosophy, mathematics, and geometry.

In these open amphitheatric spaces, the acoustics were so appropriate that the performers-actors and the singing chorus could be seen and heard clearly in the most distant audience positions [1].

Thus, the old street rituals honoring the God of Dionysus evolved staged performances, following written plays, that are considered as the foundations of dramatic theatrical repertory and are performed worldwide even today.

It is clear that such a transformation of ritual ceremonies into formalized art forms was enabled by the evolution of the theatrical space design, allowing the large audiences (often up to 15000 spectators) to hear and see actors on stage. 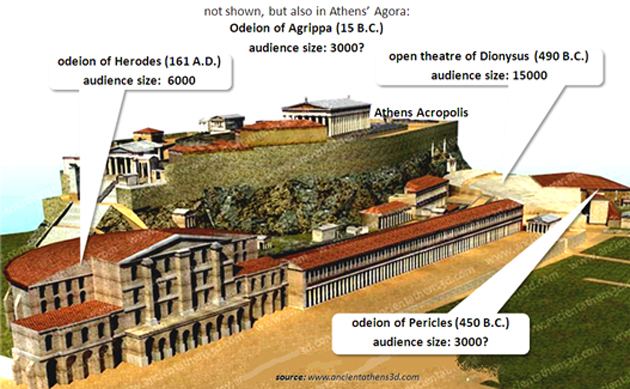 Figure 1: Representation of buildings around ancient Athens Acropolis during the Roman era. Besides the ancient open amphitheater of Dionysus, the roofed odeon of Pericles is shown, along with the later period odeon of Herodes [4]

It is interesting to note that smaller-sized roofed versions of these theaters, the “odeia” (plural for “odeon”), were also constructed during this era and also later [2], often at close vicinity to open theaters (Figure 1).

The odeia had acoustics with strong reverberations, and thus, were more appropriate for supporting music, as is also the case for modern-day concert halls, but they were not appropriate for speech and theatrical performances.

The proper acoustic properties were the result of careful design that led to the unique structure of the open-air amphitheaters. These areas consist of the large truncated cone-shaped stepped audience area with a carefully considered slope, (the “koilon” or “cavea”), a flat stage area for the chorus (the “orchestra”) and the stage building (“skene”) with the raised stage (“proskenion”) for the actors (Figure 2) [1,3].

There is evidence that the amphitheatric shape of the open amphitheaters evolved from earlier rectangular shapes, to achieve the optimal vision and hearing for every audience position [3,12].

Figure 2: (a) Structure of the Hellenistic period open theater (b) Evolution of the shape of open theaters. The red lines indicate the koilon/orchestra relationship as described by the ancient architect, Vitruvius [13]. Roman period theaters had truncated circular orchestra and taller and more elaborate stage buildings

Since very little written evidence has survived from the ancient times explaining the principles followed by the architects-acousticians of their time, an evolving branch of the modern science of acoustics (“archeoacoustics”) is attempting to explore the past.

Over the last thousand years, the significance and interpretation of manmade and natural sounds have possibly shifted, and it is also likely that ancient buildings or natural spaces were associated with sounds as divine presence, worship or therapy. It is, therefore, necessary for modern archeo-acousticians to cooperate with historians, archaeologists, and experts in theatrical arts, to create proper interpretations.

The last few decades have seen modern acoustic science employ acoustic simulation software and sophisticated computer models of such open amphitheaters, even though these spaces are known solely from archaeological records and hence virtually reconstructed as acoustic models [5-9].

Often such computer models are complemented by in situ measurements in some well-preserved ancient theaters using the more flexible portable equipment [10].

As a test case, the classical/Hellenistic theater of Epidaurus in southern Greece is often studied, which is famous for its near-perfect speech intelligibility, along with its unique architectural integrity.

Recent measurements with the audience present (Figure 3) show that such near-perfect intelligibility is retained beside the increased sound absorption, by the audience, provided that background noise levels are not excessive [10]. 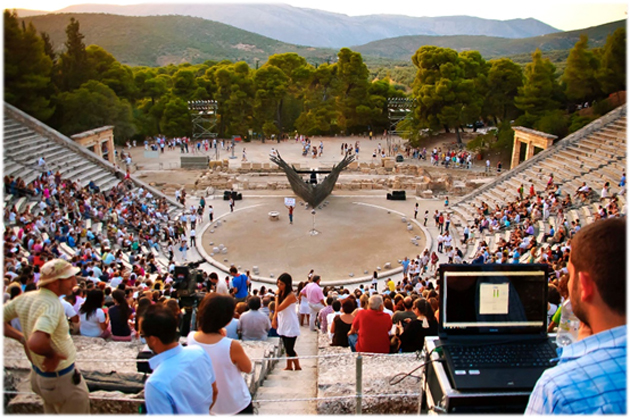 Figure 3: Acoustic measurements at the Epidaurus theater during a recent drama play [10].

From such recent research, it is becoming clear that the “good acoustics” of these amphitheaters, and especially of Epidaurus, is due to a number of parameters that contribute to perfect intelligibility even at 60 meters, provided that environmental noise is low. Note that such acoustic coverage today is typically achieved using large-scale and complex electroacoustic installations.

It is, thus, evident that for any sound produced on the stage or the orchestra, the unique amphitheatrical geometric shape and hard materials of surfaces generate sufficient (not excessive) sound energy that has been reflected and diffracted.

This energy would resonate first from the stage building (when it exists), then the orchestra floor and finally from the edges and surfaces at the top and back of seat rows adjacent to each listeners position [5-10].

Such a sound field is uniformly spread to the audience; the reflected-diffracted sound energy reinforces the sound produced in the stage since its main bulk arrives at the listener’s ears very shortly, typically within 40 milliseconds after the direct signal (see Figure 4).

Within such short intervals, as far as the listeners’ brain is concerned, this is the sound also coming from the direction of the source due to a well-known perceptual property of human hearing, often referred to as precedence or "Haas effect" [10]. 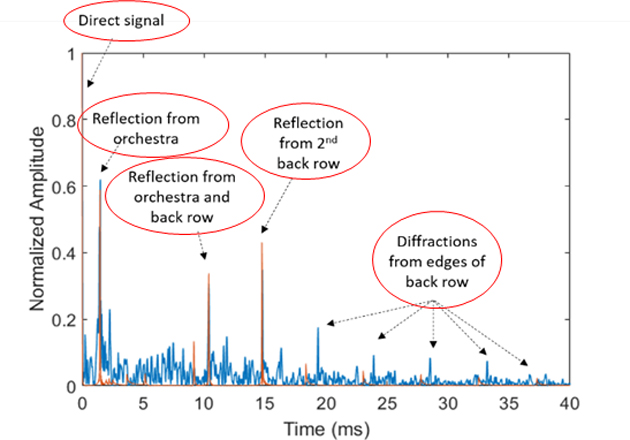 Figure 4: Acoustic response simulation for the Epidaurus theater, assuming that the source emits a short pulse and the microphone is at a seat at 15 meters [11]. Given that today the stage building does not exist, the first reflection arrives very shortly from the ground (“orchestra”). Successive and periodic reflection-diffracted waves can be observed from the top, the risers and the edges of adjacent seat rows. Their energy is reduced to the noise floor level within approx. 40 milliseconds after the arrival of the direct sound.

Following appropriate design for the dimensions of seating tier width and riser height, as well as the koilon slope, minimal sound occlusion occurs by the lower tiers and audience, and the reflected-diffracted waves are added up so that the fine-tuning of in-phase and out-of-phase combinations of the stronger direct and reflected-diffracted sounds is achieved. As a result, frequencies useful for speech communication are amplified by adding a characteristic coloration of voice sound [10,11].

Significantly, for the lower seating positions, when the direct signal from the source is still strong due to the relative proximity, the edge-diffracted sounds arrive mostly from successive rows behind the listener (see Figure 4).

However, for the more distant positions at the top of the koilon, such edge-diffracted sounds are “ascending” from the lower tiers and arrive nearly simultaneously. This strongly reinforces the direct and reflected signals and contributes to the near-perfect speech intelligibility, even when the direct signal is weak at such distances [11].

Differences in the amphitheater-design hint at possible conscious principles employed by the ancient architects and evolutionary adaptation to artistic, social trends and practical construction requirements. From only a few fragments of such acoustic design principles that have survived via the writings of the Roman architect, Marcus Vitruvius Pollio (70-15 B.C.), [13], it becomes clear that the above recent findings fully match the ancient design rules. Quoting Vitruvius: “…the height of the benches and the radius of the cavea (koilon) must be designed in such a way so that the sound reaching the listeners will be harmonic and clear without any interference. For this, the height of the benches must be designed to correspond to the height of the theater. However, this height must not exceed the width of the aisles in order to allow the sound wave to just “touch” the edges of the benches and reach the listeners unobstructed so that the endings of the words to be clearly perceived…”

Nevertheless, it is up to the modern interdisciplinary sciences to further improve our understanding and correlate such rules to the scientific knowledge of ancient times.

A virtual acoustic tour of simulated amphitheaters and odeia is available at:

Top Image: The amphitheater in Greece, built in the 4th century, is known for its good acoustics. (Source: history.com)

John Mourjopoulos is Professor in Electroacoustics and Digital Audio Technology at the Electrical and Computer Engineering Department of the University of Patras in Greece. He has obtained BSc degree in engineering from Coventry University and MSc and PhD degrees in 1980 and 1985, from the Institute of Sound and Vibration Research (ISVR), at Southampton University. He has authored and presented more that 180 papers in refereed international Journals and Conferences and was awarded the Fellowship...Read More