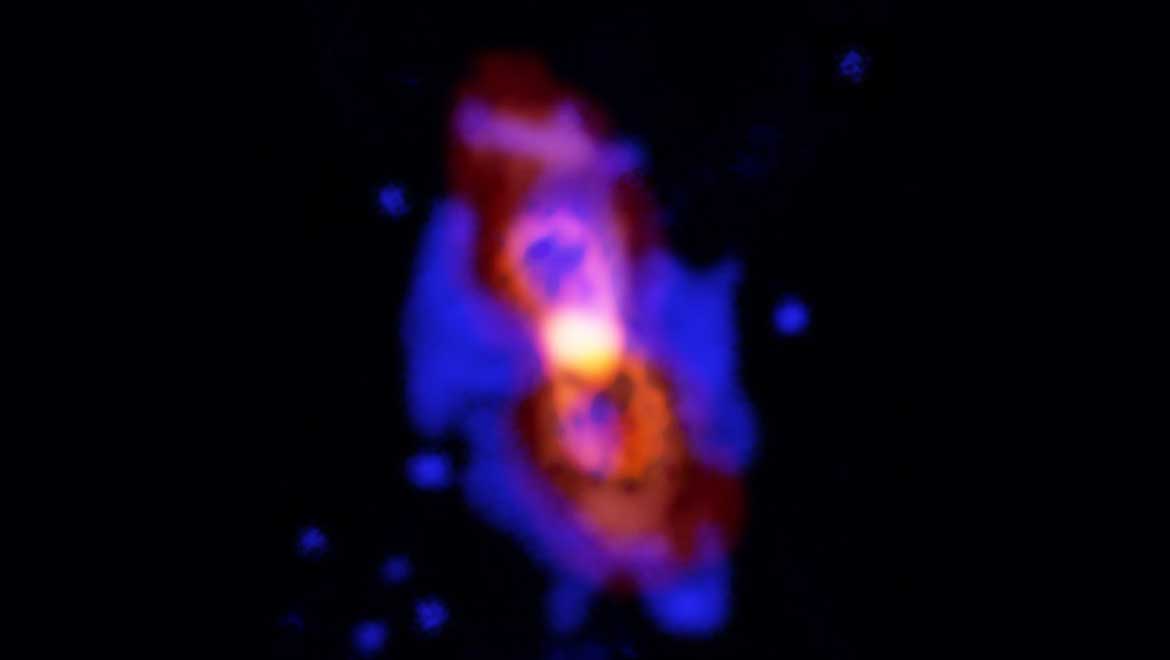 Just over 400 years ago, two stars in our galaxy collided in space. This event was observed by astronomers on Earth, although they were not able to detect all the spectacular details and fallout of this event.

Now, scientists at the European Space Observatory’s Atacama Large Millimeter/Submillimeter Array (ALMA) have evaluated the signals that remained from this 1670 event. They were able to confirm that the collision, which involved two solar-class stars, resulted in the creation of a 'new star.' Furthermore, the researchers have also determined that this event also caused radioactive particles to be blasted into space in the course of the collision. This is the first time that such particles have been detected.

The researchers collaborated across institutions in Poland, France, Germany, Australia and the US to complete this study.

The team used ALMA (in addition to the NOEMA (Northern Extended Millimeter Array) telescope) to detect a subtype of 26AlF in the debris around the new star. This body, which has been named CK Vulpeculae (or CK Vul), is one example of what may happen when two sun-like stars collide. It is also thought of as a red star due to the light it emits. This body is still surrounded (as far as observers on Earth are concerned, at least) by the debris resulting from the collision.

The investigators were able to conclude that this debris contained 26AlF, which is an isotopologue of aluminum monofluoride due to the fact that it was radioactive. Therefore, gamma-ray telescopy was able to detect the beta-decay-related signals of these particles.

26Al has a half-life of just over a million years, which eventually resolves itself through decay into stable 26Mg (an isotope of magnesium). The researchers found no evidence that suggested CK Vul produced any kind of aluminum isotope. Therefore, the radioactive 26AlF was probably a result of the original stellar collision. 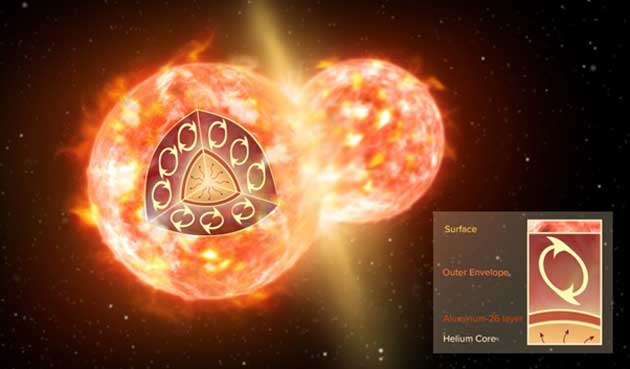 An artist’s impression of a solar collision such as the one resulting in CK Vul, showing the possible original source of the 26-aluminum. (Source: NRAO/AUI/NSF; S. Dagnello)

On the other hand, the scientists now believe that CK Vul also released 26Al on its own. However, the group was only able to confirm the presence of the 26AlF particles, specifically. This was due to the previously-established signals associated with these radioactive species. They emit light at a specific wavelength as they travel through space. This property, known as the molecular rotational line, has a scale of millimeters and was amenable to capture through the ESO’s telescopes.

The results of this detection also offer clues as to the nature of at least one of the stars involved in the ‘birth’ of CK Vul.

The scientists reported that the estimated extent of 26AlF particles released in this event indicates that one of the stars involved in the incident was at the red-giant stage of stellar life. The star was also measured to be at least 0.8 Sol in mass. This is why the event is now considered to have involved stars of solar proportions.

On the other hand, other collisions with even bigger stars have been recorded. The researchers have also now concluded that the ‘cloud’ of 26AlF particles that resulted from this collision had a mass roughly equivalent to 3 Sol. This miasma of radioactive debris would also have spread all across the Milky Way. However, astronomy has only recently been able to confirm that it emanated from the vicinity of CK Vul.

This study has been published in the journal, Nature Astronomy.

The researchers also now believe that it may help them to identify other sources of radioactive aluminum in the galaxy. Prior to the study’s completion, it was thought that stellar collisions were relatively rare events and could not provide much radioactivity. Now, however, this preconception may need re-adjusting, especially if similar projects in the future detect more of these events, in conjunction with 26AlF or similar particles.