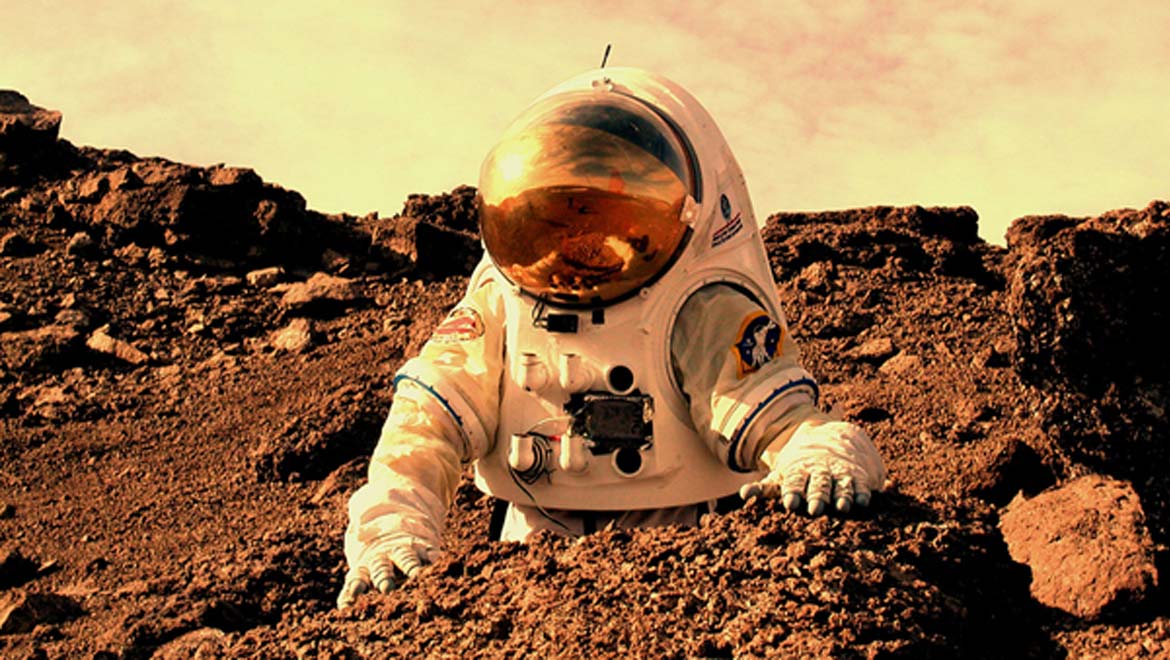 Are you ready to pack up and go to live on a Martian colony? Elon Musk thinks you should be.

Musk, the increasingly well-known CEO of SpaceX, the prospective space-tourism company, recently announced that his team will have routes to and from the red planet in only seven years from now. The entrepreneur behind the Tesla e-cars unveiled his plan that includes successful human travel to Mars as only one of its main objectives. In this article, we take a closer look at those plans.

Interestingly, Mr. Musk is banking on one single new spacecraft type as the vehicle for all his radical new plans. This ship, codenamed the Big F*cking Rocket, (BFR) is still apparently in development. When it is completed and available for flight, it will be capable of repeated launches and landings, just like a conventional airliner. This is a crucial difference between current spacecraft in use by major national or international authorities such as NASA or the ESA: most of these are single-use shuttles that do not have truly reliable landing gear or protocols. On the other hand, Elon Musk is banking heavily on the economics of running the first genuinely re-usable space rocket for the success of this mission, and also possibly that of the company’s as a whole.

Elon Musk volunteered a number of details about SpaceX’s new craft, the BFR, in the course of this announcement. It will apparently be capable of lift-off and landings on both Earth and its extra-terrestrial destinations. The BFR will also have a reasonably large capacity for passengers: it will accommodate over 100 travellers in 40 different compartments. Musk’s plans include trips to and from the Moon, as well as manned missions to Mars. The BFR will ferry teams to both destinations, who will build bases and fuel plants that will ultimately service the goals of building permanent bases or colonies in these locations.

SpaceX plans to build four separate rockets to service these lofty ambitions. However, it is slightly difficult to envisage exactly how this will be done. Currently, the bulk of SpaceX’s revenue comes from commissions from social media or telecommunication companies to convey their satellites into space. However, Elon Musk also stated in his announcement that all of the company’s current major assets, including their existing ‘Heavy’, ‘Dragon’ and ‘Falcon’ crafts may well be consolidated into this project. This is an arguably massive gamble on the success of a single re-usable rocket – especially one that doesn’t technically exist yet.

The BFR itself is still to be unveiled at the time of writing; however, Musk says that he estimates the first launch date will be in approximately five years from now, sometime in 2022. Furthermore, he intends to have a full programme of flights to Mars set up in the next two years after that. However, other authorities in space flight and Martian colonization indicate that these plans are rather over-ambitious. His presentation of a preliminary model of these plans at the 2016 International Astronautical Congress, (IAC) which took place in Guadalajara, Mexico, met with a lukewarm response mixed with some scepticism.

Robert Zubrin, who runs the Mars Society, an organisation involved in projecting the effort involved in moving humans to Mars, found Musk’s plans overblown and over-reaching. He compared Musk’s ideations of having up to a million people on Mars in about a hundred years to the orchestrations of the 1944 landings on the beaches of Normandy. Zubrin also appears to think that Musk’s plans should be scaled down so as to be more realistic. On the other hand, D-Day was in fact a spectacular success, as were SpaceX’s simulations of their Martian expeditions at the IAC.

Can Musk pull it off?

The levels of optimism concerning SpaceX’s success in this endeavour may have one critical enemy, and that is Musk himself, in conjunction with his own pronouncements. He has admitted that his business plans work somewhat along the lines of the ‘Underpants Gnomes’ song from an early episode of South Park. In other words, at least one of the steps that lead to actual concrete funding for the company’s master plan are rather nebulous, at least from the general public’s point of view. Musk is also equally vague about his motivations to take such a leading role in space exploration, citing an unspecified ‘extinction event’ that would push humanity into leaving Earth for new worlds in the immediate future.

Musk was also less than specific about some other aspects of the BFR project during its announcements, including that of how it would be fueled and how much this would cost, besides mentioning that said fuel would be ‘cheap.’ Additionally, SpaceX has had a history of launch failures. In 2016, a Falcon 9 rocket – one of SpaceX’s currently extant re-usable rockets – was scheduled to carry out a satellite-deployment mission for Facebook, but underwent a spectacular explosion during its launch at Cape Canaveral. On the other hand, the same type of rocket has also demonstrated the ability to take off safely 16 times over.

Elon Musk’s latest announcement about SpaceX and its next steps encapsulate his approach to finally unlocking space flight and travel to a greater proportion of humanity. It could be argued that his audacity – for example, including the phrase “steal underpants” in a presentation to the 67th IAC – and ambition is to be appreciated in what continues to be an era of uncertainty and caution for the ‘space’ sector. However, this latest public exhibition, which essentially outlines what SpaceX currently thinks the next generation of space-craft is going to look like, offered little concrete information on the commercial or scientific value of the ‘BFR’ project, not to mention what it means for humanity in general. On one hand, this new rocket may be based on an earlier model with a decent record for reliability and re-usability; on the other, much of the content of this latest presentation by the notorious billionaire comes across as a particularly expensive pipe dream.

Top image: Rendition of person in a spacesuit on Mars. (Public Domain)