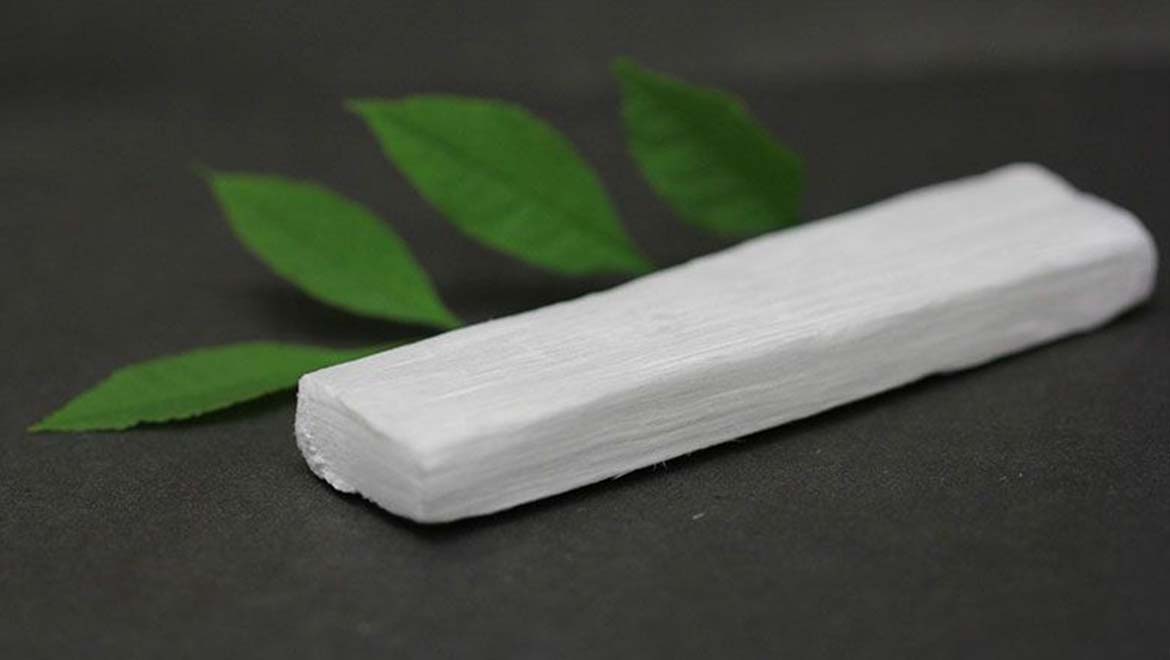 Storm Emma, which occurred in early 2018 in the UK, may have stressed the importance of heat conservation for the many people affected by it.

Modern dwellings can be insulated by incorporating thin sheets of aerogel or Styrofoam into building shells during construction. However, these materials are synthetic and can represent environmental damage in their manufacture or disposal.

Therefore, the research and development of insulators now require natural materials for the next generation of heat-conserving sheeting. The latest example of this is nanowood, the result of a study into the thermal properties of tree products. This proposed insulator has impressive heat-management properties and is also light, durable and biodegradable.

How the Nanowood was Constructed

The 'nanowood' was developed by a team of materials science and engineering researchers collaborating across the KTH Royal Institute of Technology in Sweden, the University of Colorado, (Boulder), and the University of Maryland (College Park). Led by Dr. Liangbing Hu of the Department of Materials Science and Engineering at College Park, the group set out to create a new form of cellulose-based insulation.

Cellulose is a natural proteinaceous product that holds cells together in plants. Therefore, it tends to be very strong and flexible in large, well-organized quantities. However, Hu and his team focused on the potential thermal properties of cellulose laid out in a specific conformation of nanofibrils.

Similar forms of cellulose in nanofibril form have been investigated as possible insulators, in the past. However, these materials tended to have poor mechanical properties, i.e., they were not feasible as heat-management products. Some other nano-cellulose materials failed to exhibit the regular, well-knitted molecular structure needed for superior insulation.

The researchers in Hu's team, in their recently-published article in Science Advances, put all this data down to the manufacturing processes used in the production of the putative materials. They were sourced from bulk cellulose (natural sources or otherwise) and then built into the required nanofibril-based structure. However, it was apparent to the investigators of this study that the process was less than reliable.

Therefore, Hu and his team decided to take the opposite approach to nano-cellulose production. The nanofibril structure they wanted was also present in processed wood.

Accordingly, the team sourced natural wood (American basswood) and treated it with a combination of sodium hydroxide and sodium sulfite. The resulting mixture was then heated until it boiled and then treated with hydrogen peroxide. This generated a matrix of cellulose nanofibrils that lacked the lignin and the majority of the hemicellulose found in the original living wood.

This material - the nanowood that the researchers were looking for - was then tested for properties such as thermal conductivity. 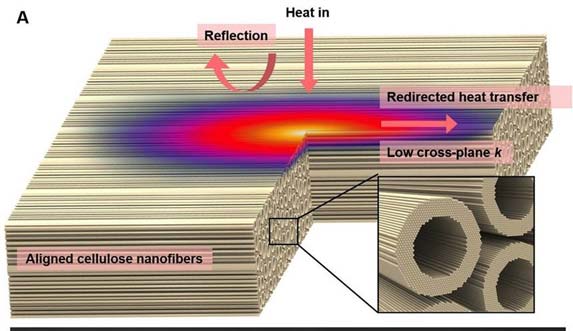 Thermal conductivity (measured in watts per meter-kelvin (W/(mK))) is a property that determines how much heat gets from one side of a material sheet to another side.

The researchers also reported that the thermal conductivity of the nanowood was superior to that of silica aerogel insulation and comparable to that of Styrofoam (for the against-the-grain value).

However, these results mean little in the absence of good heat-exclusion properties in conditions of increased external temperatures. The team tested this by exposing a sheet of nanowood to 160°C temperatures on one side and measuring the resultant temperature on the other. They found that the new nanowood surface could be heated to a maximum of 30.5°C, whereas a sheet of aerogel, used as a control, heated up to 36.5°C.

The researchers also applied sheets of nanowood, natural wood, and Styrofoam to a heat density of 500mW/cm2 and found that their material retained up to 29.9°C (these values were 39.3° and 57.1° for the Styrofoam and natural wood, respectively).

The nanowood was also found to have impressive light emissivity, which means it can reflect light effectively - including solar radiation - rather than absorbing it. The new material was found to be able to reflect about 95% of solar-spectrum light, and absorb only 2% of it. A comparable piece of aerogel reflected 60% of the same light while absorbing 20%.

Nanowood samples were also reported as superior in mechanical strength in comparison to similar insulators such as Styrofoam, polystyrene and natural wool.

The scientists showed that the 'wood' exhibited a strength of 13 megapascals (MPa) at 75% strain with the grain (as well as 20MPa against it), which was approximately thirty times greater than that of the strongest commercially-available insulator.

The nanowood was reported as extremely light and malleable, which may make it more amenable for use as an industrial material. The researchers also claimed that their nanowood could be sliced to about 1 millimeter in depth and take many forms, so as to conform to pipes, walls or fittings.

Additionally, the nanowood structure was not conducive to potentially harmful fibers or fragments, as opposed to older materials such as fiberglass.

Finally, the nanowood was adjudged advantageous in terms of biodegradability.

Researchers have created a material that is “greener” than the other commercially-available products. (Source: University of Maryland)

This new form of insulation may give weight to the increasingly strong argument for cellulose-based materials in academia and industry.

Cellulose-based products have recently been proposed as super-strong construction materials. Such products were recently showcased as a result of a different form of wood processing that resulted in a conformation of cellulose fibers with enhanced mechanical strength and durability.

Alternatively, other researchers have proposed paper-based electronics as new facilities for medical testing in the field.

This new example of cellulose-rich materials may prove a viable alternative for products such as Styrofoam, one day.

In addition, the researchers note that other types of wood could also be used to produce their nanowood (which could include sustainable sources). They also claimed that their new material could be made for less than $8 per square meter.

Therefore, it is only a matter of financing and up-scaling before this eco-friendly insulation will be seen in the market.

Top Image: Nanowood has the potential to be the new construction material. (Source: Hua Xie/University of Maryland)