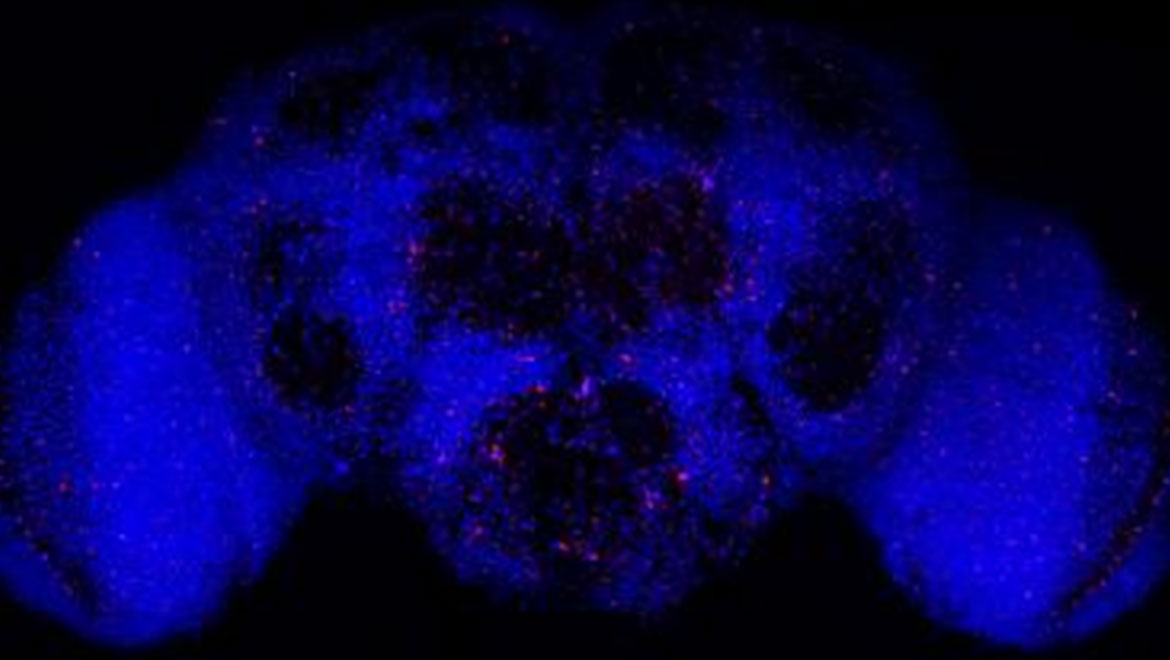 Alzheimer’s disease (AD) is a condition in which long-term memory is lost through the widespread loss of nerve cells in specific parts of the brain. Furthermore, the disorder may acquire behavioral or emotional symptoms if cell death gets slightly less-targeted over time. Therefore, AD is categorized as a neurodegenerative disease, mainly because the loss of brain cells (i.e., neuronal cells) is thought to be the main driver of the condition.

However, new research conducted at the Champalimaud Centre for the Unknown (CCU) in Lisbon, Portugal, suggests that this theory is not as straightforward as previously thought.

The prevailing hypothesis of AD is: Neuronal cells in the hippocampus (and some surrounding regions of the brain) die as a result of exposure to toxic levels of the pathological protein amyloid-beta (Aβ, most often Aβ42). Therefore, these cells must be rescued somehow, as their loss would lead to the catastrophic losses of hippocampal volume seen in late-stage AD.

However, the CCU study may intimate a novel, modified theory of neuronal death in AD.

This new thesis basically says that the cells affected by Aβ are unsalvageable, and therefore, clinicians should let them die and focus on the ‘fitter’ neurons that may have a chance to thrive and replicate to replace them. It is based on the recently discovered phenomenon of cellular ‘competition,’ in which the less fit (or diseased) cells express specific proteins, which cause the healthier cells to come along and trigger apoptosis in them.

This process may sound harsh. However, a population of cells is not to be weighed against a healthy organism, which benefits from this competition as the healthier cells go on to divide and contribute to the overall integrity of the tissue in which they find themselves.

Cellular competition is enacted through a second, relatively novel, process called comparison. This means that the cells in question constantly ‘check’ each other for the ‘less fit’ protein markers, and engender apoptosis in those that exhibit too many of the “wrong” ones. ‘Comparison’ and ‘competition’ have been demonstrated in the CCU labs since 2015, and have been shown to have important roles in anti-aging and other health-promoting physiological processes.

Therefore, Christa Rhiner, a researcher in the area of stem cells and regeneration, and her team set out to assess models of AD for cellular competition and comparison, and what happened when they were either inhibited or boosted.

This experiment, performed in fruit flies (Drosophila), was used to simulate the effects of AD when they are engineered to express human Aβ42 in their brains, particularly the regions responsible for eye development, memory and cognition. The research team assessed this tissue for comparison and competition and found that the fruit fly's ‘less fit’ markers (known as the Flower protein family) were present, as were Flower-associated apoptotic proteins such as Azot.

The team reported that Flowerubi (the ‘ubiquitous’ fitness marker) was present in healthy neuronal cells, but that FlowerLoseB was expressed in cells that became less fit. Therefore, the increased expression of genes such as Azot was induced in these cells, which led to their ‘natural’ death in the normal course of things.

Earlier studies had resulted in findings that Azot knockouts (azot{KO}) resulted in reduced apoptosis in tissues such as in the brain of fruit flies. However, it is less clear if this is a beneficial effect or not.

The group of researchers also found that flies engineered to express Aβ42 in response to the typical neuronal gene promoter (or driver), GMR-Gal4 (i.e., GMR>Aβ42), exhibited a marked uptick in the expression of FlowerLoseB.

This was confirmed by engineering the FlowerLoseB gene to express protein product with a fluorescent marker (mCherry, i.e., FlowerLoseB::mCherry) so that the team could quantify this expression pattern using imaging techniques. The GMR>Aβ42 subjects reportedly expressed significantly more FlowerLoseB::mCherry proteins compared to control flies (GMR>LacZ).

The team also found that an experiment using subsequent lines of these flies (GMR>Aβ42 and their controls) with additional Azot knock-outs (azot{KO; GFP}), in which another fluorescent marker, GFP, was expressed in place of the Azot gene), resulted in findings that Azot was also up-regulated in neuronal cells expressing Aβ42 compared to normal cells.

These genes led to the elimination of ‘Aβ42’ cells from growing neuronal tissue (as assessed through imaging studies in which both Azot and FlowerLoseB were conjugated to mCherry) over time, compared to control cells expressing a non-harmful engineered gene.

The CCU team then investigated the effects of Azot and FlowerLoseB on Aβ42-induced neurodegenerative vacuoles (pathological ‘gaps’ in brain tissue) in the fruit flies. This was done through the use of the inducible promoter elav-GeneSwitch (elavGS), which enhances the gene with which it is engineered to become associated when the subject 'eats' the compound, RU486. 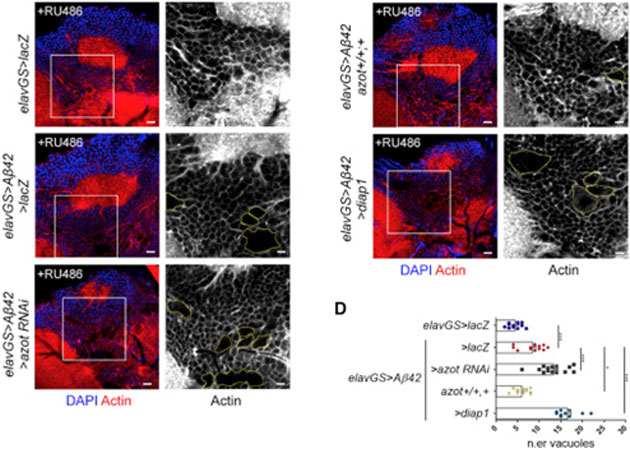 Imaging studies of the ‘memory center’ of the fruit fly brain, with cell nuclei (blue) and the cellular cytoskeletons (actin, red) bound to fluorescent markers (left) or visualized simply through the cytoskeletons alone (right). Vacuoles are visible within yellow squares. Sub-figure (D) shows the effect of elavGS>Aβ42 on vacuole numbers, in the presence or absence of Azot and in the presence of DIAP1, an apoptosis inhibitor. (∗∗∗:p < 0.001, ∗∗:p < 0.01, ∗:p < 0.05.) (Source: Coelho, D. S. et al, Cell Reports, 2018)

The life expectancy (as measured by average survival time) of the elavGS>Aβ42 flies was also reduced by 51% in response to Azot silencing (via the RNAi technique).

However, Azot restoration was reported to be associated with improvements in long-term memory and motor coordination in these insects.

All in all, these findings appear to indicate that the conservation of neuronal cells alone may not be an effective therapeutic strategy in AD. On the other hand, this is based on a single study in fruit flies and has no guarantee of translating well to the increased complexity and stakes of human brains in cases of AD.

However, the research does imply a possible new line of inquiry into AD treatments that are more targeted and precise in the future. In addition, it also presses the point that dogmas of any kind may end up being detrimental to science of any kind.

previous article
Underneath an icon cracks the literal criterion
next article
Eventful CES 2019: Self-Driving Tesla and AI Robot Collide and Cause ‘Accident’