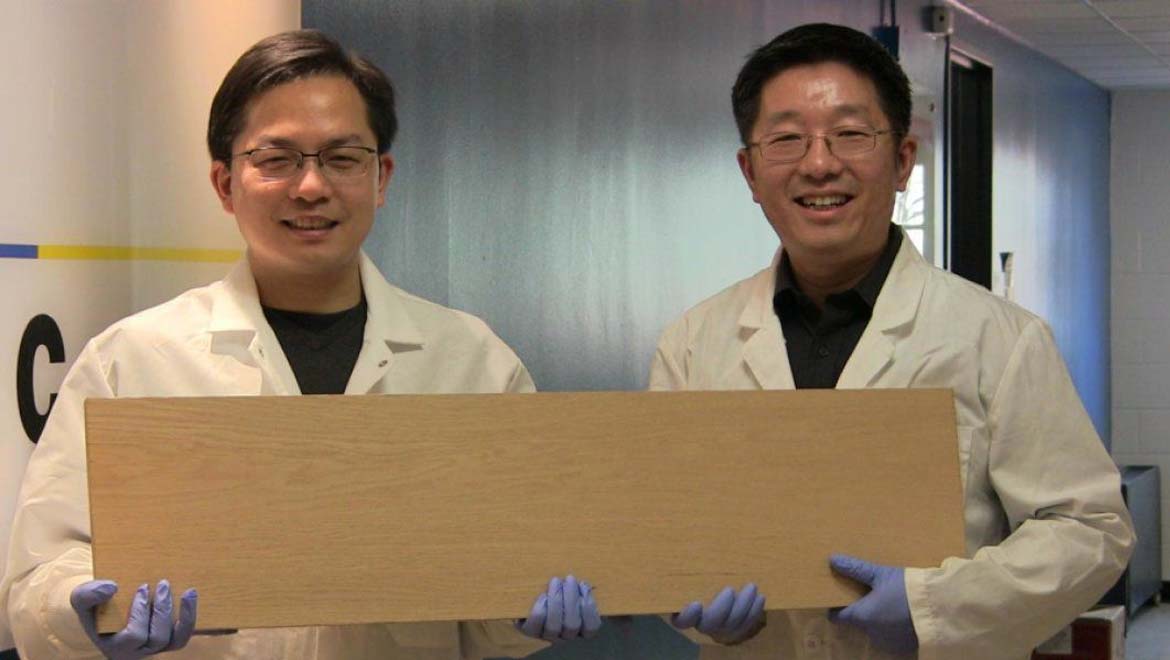 Metal is an incredible form of matter. Furthermore, the common tools made of the high-grade purified elements and alloys we’ve come to take for granted are the results of intensive research, development and labour over millennia. Humanity’s continuous investigations into better, stronger metals have informed civilisations, and determined the survival of some, over the course of its existence. On the other hand, the resources that go into isolating, processing and shaping metals are astronomical and often very hard on the environments in which they are mined, refined and engineered.

Accordingly, some scientists have devoted their careers to finding methods that can convert other, non-metallic materials into ones with all the desirable properties of high-grade steel (for example) at reduced cost or ecological impact. These materials are often wood. High-quality wood can be extremely strong and durable, and is also relatively abundant. However, many high-tech metals such as titanium alloys can still beat even the hardest woods. On the other hand, super-tough wood could have a role in industries such as construction that could benefit from saving on products such as steel rebar for the reinforcement of concrete shells.

Conventional wood could theoretically be made into a super-strong material through its compression into a denser material. Previous work into the development of this strategy has resulted in the development of processes such as pre-treatment with reactants such as ammonia or water vapour, or alternatively by cold-rolling or heating the wood. However, the resulting material tended to spring back towards its original density at unacceptable levels of physical provocation. Humidity is a prominent factor in this failure of density-enhancing treatments for wood. Therefore, a ‘hardening’ process for wood would need to overcome such risks. A team of researchers from the University of Maryland, the USDA’s Forest Products Laboratory (Wisconsin), the University of California (Merced) and Northeastern University claims to have developed a process that avoids the loss of compression in the wood they treated while drastically increasing the strength of the resulting substance.

These scientists, led by Liangbing and Hu Teng Li of the University of Maryland, demonstrated a two-step process in which their wood was “densified” and also reduced to about a fifth of its original thickness. The process began with the treatment of wood with an aqueous mixture of sodium sulphite and sodium hydroxide. This removes a proportion of the lignin and hemicellulose in the wood, which give strength and rigidity but also a rather open molecular structure to the living plant. The treatment allowed for the success of the second step, which involved the compression of the wood at 100⁰C to completely destroy the integrity of the cell walls in the wood, thus removing any air-gaps that could have remained in the material.

This process ultimately resulted in a substance primarily composed of cellulose, a polymer that can have impressive strength and durability in vivo, and the remainder of the processed cell walls. The cross-section of the material was composed of closely intertwined walls, which lay in a uniform arrangement of well-packed fibres along their length. At a scale visible with scanning electron microscopy, the cellulose formed nano-structures that were aligned and arranged in a much stronger, more uniform conformation than that of natural wood, or that produced by heated compression alone.

The researchers then tested the physical properties of their treated wood. They found that its durability was increased tenfold compared to untreated wood, and had increased 11.5 times in terms of strength. The tensile stress-strain curves computed for the processed wood was found to equate to 587 megapascals (MPa), which was also superior to the same values for other forms of compressed wood, many plastics and nylon. The specific strength (expressed in MPa/cm3/g)) of the Maryland team’s treated wood was 451 MPa/cm3/g, compared to 244 MPa/cm3/g for a titanium-aluminium-vanadium alloy. The processed material was also resistant to humidity, as it withstood conditions of 95% relative humidity for 128 hours with an increase in width of only 8.4% while retraining a specific tensile strength of approximately 493 MPa. The team also claimed that a sample of their material treated with paint prior to the same humidity-exposure test (at 541 MPa in strength) gave a value of 536 MPa after the same timeframe.

This study, published recently in Nature, appears to demonstrate that wood can have extreme durability and strength in response to the appropriate treatment. The researchers also reported some other interesting findings, such as that removing all the lignin in a wood sample prior to hot compression leads to the increased risk of crushing under the pressing implement, indicating that some flexibility in a super-strong material is beneficial. Indeed, the flex-related strength of the processed wood was approximately 6 and 18 times higher than that of natural wood, both ‘with’ and ‘against’ the grain, respectively. The treated wood was also 30 times more scratch-resistant than its natural counterpart, as well as 8.3 times more impact-resistant.

Studies such as these may lead to a revolution in the super-strong materials used by humanity as it refines and advances its living spaces, infrastructure and facilities. The team of researchers used a wide variety of wood type from many different trees (oak; poplar; basswood; a form of pine and western red cedar) to create their new treated and compressed substance. They demonstrated that it can withstand impacts, surface damage and moisture, as well as offer enhanced physical strength in comparison to ordinary wood. In addition, it was also shown to be superior to a form of titanium in some respects. Therefore, processes such as these in conjunction with a sustainable, large-scale wood source could solve a lot of problems related to the resources needed for human development and habitation. All in all, the future may include much more wood than ever envisioned.

Top image: Researchers say the super wood could be used in cars, aeroplanes, and body armour. Source: UNIVERSITY OF MARYLAND