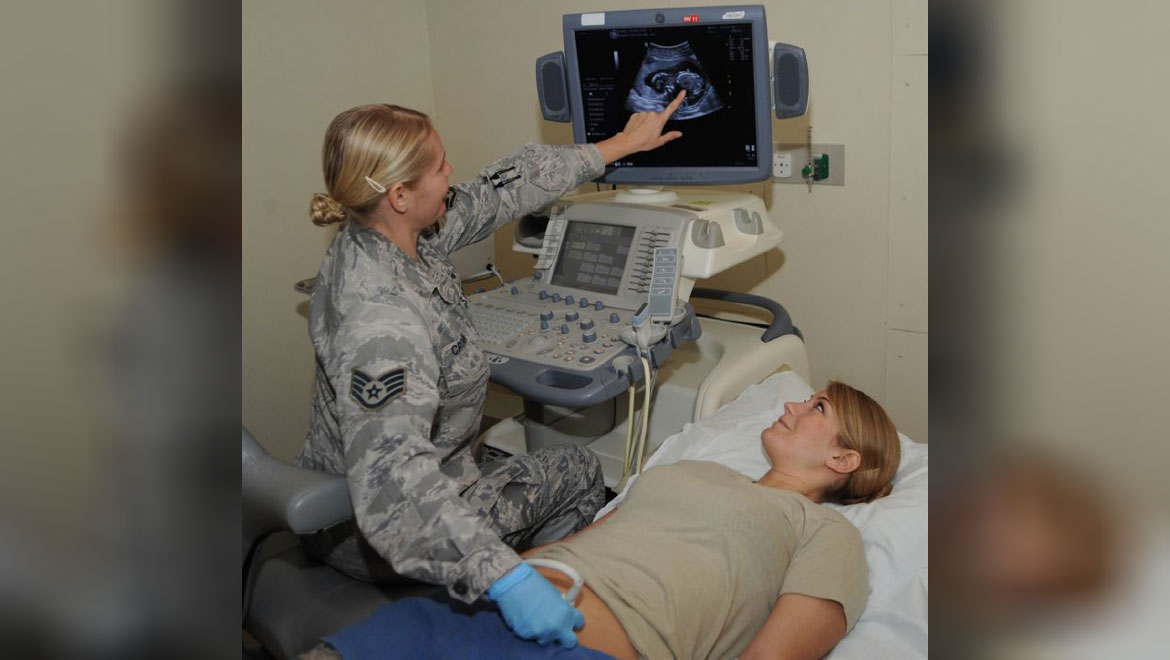 Ultrasound is one of the most common and ubiquitous forms of imaging. It is often applied to the medical variety of this discipline and remains a preferential situation in areas such as emergency department-based diagnosis. In addition, medical ultrasound equipment has become so intuitive, and portable, that it is also being employed in situations of mass casualties or traumas. These eventualities may occur as a result of events such as natural disasters, armed or explosive attacks or other forms of destruction that targets buildings or infrastructure. Therefore, many people could benefit from even more streamlined, cheaper form of ultrasound.

A team of researchers has set out to address this need. Their new variation on existing ultrasound hardware is reportedly just as effective as existing solutions but could cost as little as a hundred US dollars.

Ultrasounds (US) can be deployed in mobile or portable sets that incorporate the actual technology, the diagnostic pads or wands to apply to the patient’s skin, and screens on which to visualize the resulting images. Therefore, this imaging technique is often incorporated into emergency medical responses in the field, which could include locations or situations for which hospital-based treatment is too remote or unfeasible. For example, the ultrasound is often deployed in military engagements, mass casualty and trauma medicine and situations in which hospital facilities have been destroyed. Therefore, the ultrasound market is estimated to be worth as much as US$7 billion by 2019, despite the low cost of its hardware.

Many forms of conventional US are facilitated by piezoelectrics. This form of energy transduces the vibrations created in the target object (e.g., a bone or organ; known as sonograms) for analysis through a receiver on the US machine. This results in the representation of the sonograms as on-screen images. However, this strategy may be relatively expensive, as the piezoelectric steps in the process require specific types of crystal to work.

However, there is an emerging alternative known as capacitive micromachined ultrasound transducers (CMUTs). They take the form of a tiny drum-like membrane stretched over a capacitor and a fixed electrode across a short space for vibration. Therefore, CMUTs take the place of piezoelectrics in the scheme of ultrasound function.

CMUTs have become associated with advantages over piezoelectrics, in ultrasound:

For example, the former displays a higher bandwidth compared to the crystals, which can only muster 50% in this respect at best. CMUTs, on the other hand, have demonstrated equivalent bandwidths of as much as 82%. CMUTs are also more compatible with the rest of the electronics found in ultrasound hardware. In addition, piezoelectrics are not very compatible with human tissue in terms of acoustic impedance. The crystals are often associated with impedance values of about 30 MRayl (a unit of electrical impedance), whereas the organic tissues have a value of about 1.5 MRayl. Therefore, thick layers of high-density rubber must be incorporated into typical handheld US probes. 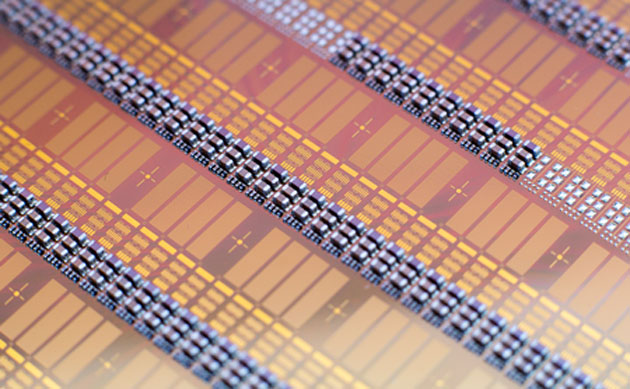 Conversely, CMUTs have (at least, theoretically) reduced impedance due to the freedom of the membrane portion to move above the capacitor. Therefore, their interface at human skin may be much more streamlined. But, this alternative method may be associated with reduced sensitivity (measured in decibels) compared to piezoelectrics. Therefore, the ultrasonic waves emitted may be less efficient in assessing tissues deeper into the skin.

On the other hand, some studies have indicated that CMUTs are capable of reducing noise in the signals they send back to receivers. In addition, they are more amenable to high-volume arrays compared to crystals. These factors may help them overcome the low-sensitivity issue over time.

However, CMUTs have traditionally been out of reach of the cost-effective US machine, as the ‘drums’ involved have been made of silicon. This puts them in the realm of electronics in terms of manufacturing costs. Additionally, silicon CMUTs may require relatively convoluted and extensive fabrication steps such as etching or the dissolution of sacrificial layers so as to create the necessary cavity between membrane and capacitor.

A team of researchers from the University of British Columbia has reimagined the CMUT for cost-conscious consumers. Their new version is known as the CMUT made of polymers (or poly-CMUT). It replaces the silicon with a polymer-based resin for the membrane. The scientists behind this recent innovation estimate that this will bring the production costs involved to the US$100-range.

The scientists used a resin of the SU-8 2000 series of polymers to replace the silicon in their poly-CMUT. SU-8, which is also a photopolymer, was chosen for its optimal density, flexibility, dielectrics, and thermoelectrics. The polymer could also be patterned (a production step that could replace etching) and spin-coated into a membrane to form the poly-CMUT. The cavity was formed through the use of a second material called Omnicoat. This popular layer-forming chemical could be etched away through strategic holes ‘cut’ into the SU-8 layers of the transducer using UV exposure. This left a cavity into which the eventual SU-8 membrane could bend into a curve of up to 27% of the cavity’s internal capacity. 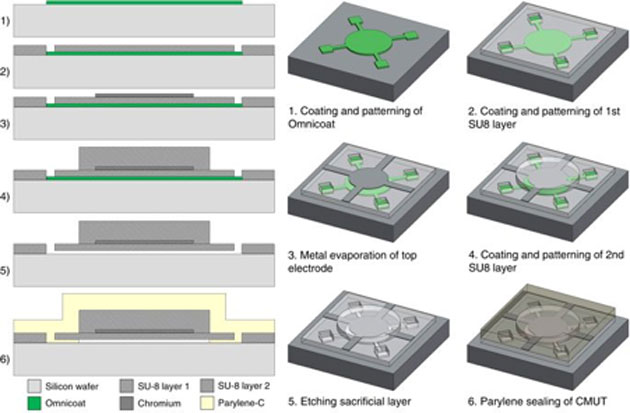 A schematic of the poly-CMUT production process including the addition of a chromium electrode. (Source: C. D. Gerardo et al, 2018)

The entire process, known as lithography, took about 17 hours per poly-CMUT and was estimated to cost under $100.

The team reported that the SU-8 membranes could be applied directly to the skin with minimal and acceptable adverse effects. This factor, combined with the natural freedom of the membrane to move under atmospheric pressure, was reported as likely to help overcome the sensitivity issue to which silicon CMUTs were subject. In addition, the operational voltage required by the poly-CMUTs (only 10V) increased the membrane’s inward flexion to 32.1% of the cavity.

As a part of the study, the new CMUTs were arranged into arrays of 64 transducers, each onto a printed circuit board (PCB). They used it to image a wire phantom, or an arrangement of aluminum wires spaced 5mm apart in a tank of mineral oil, as a standard test of US signal transduction. The array was powered by 12V pulses, oscillated at 2MHz and with the 10V operational DC power source, as before. This resulted in an image in which all 12 wires were visible, to a depth of 85mm in the tank, at a resolution of 1.5mm or more.

Therefore, the team concluded that their array of poly-CMUTs were appreciably sensitive and accurate. Furthermore, its relatively low power requirements meant that it could be operated using conventional power sources – even a smartphone battery. 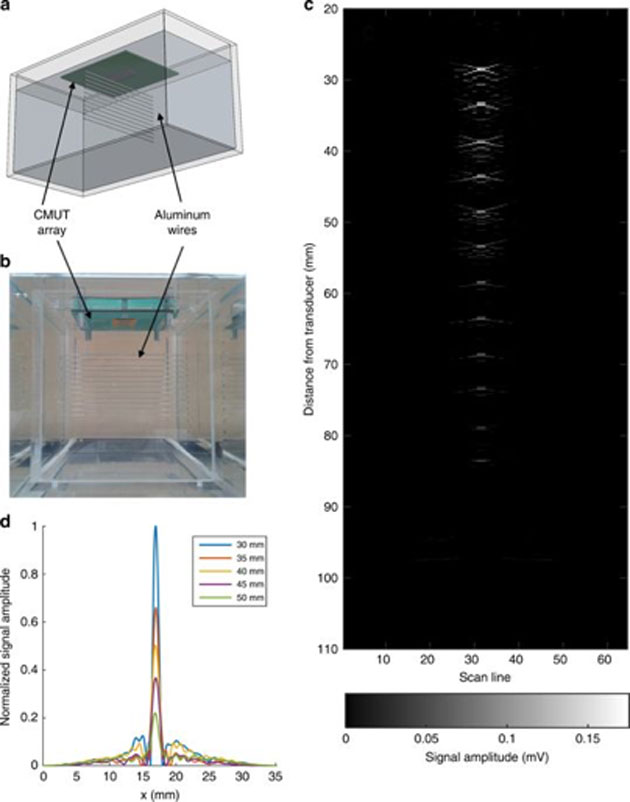 Therefore, the group of British Columbia researchers asserted that their new type of CMUT had the potential for inclusion in next-generation ultrasound devices.

They also reported, in the paper published in a recent issue of the journal, Nature Microsystems & Engineering, that their new production process refined the number of steps necessary in CMUT fabrication and could end the need for other polymers, besides SU-8, for further potential optimization.

Though, the team conceded that more testing was necessary to gain a full idea of the poly-CMUT’s acoustic capabilities and profile. Hopefully, research on these remaining questions will be conducted and will result in improved, cheaper, ultrasound technology for the future.