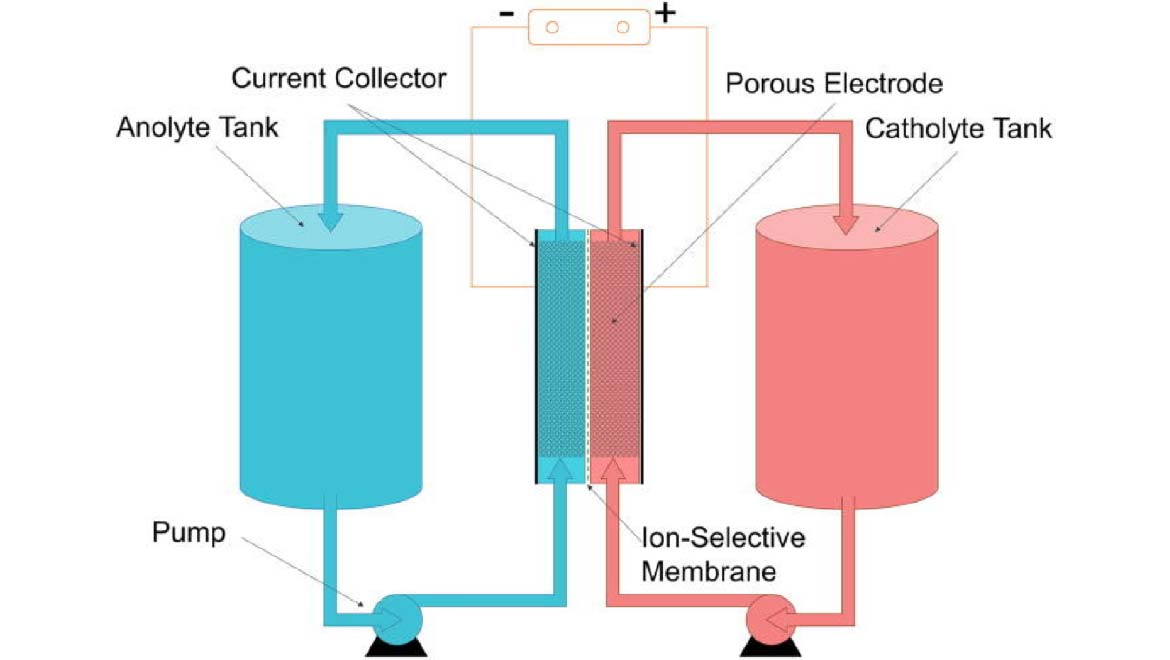 Electricity as a result of converting sunlight into usable energy is fairly straightforward, but, so far, mostly only in theory. This process follows a general hypothesis -- the sun provides all the energy that humanity needs, and more, in the average year. Therefore, capturing this light using equipment such as solar panels could resolve the global 'energy crisis' immediately.

However, there are a number of practical and technical problems with this concept. For example, solar panels tend to provide only 30% of the energy that they are rated for, directly. This is often not enough to so much as power a home, even with the latest low-power electrical components and fittings.

Therefore, solar panels are being scaled up to serve entire regional or national grids. However, this has also resulted in problems, especially in the presence of fluctuating or unreliable sunlight exposure. Even when the light is relatively constant, the power absorbed may go to waste, unless it can be stored for later. This method, in turn, requires batteries, also on a large scale so as to be compatible with the needs of even a small grid.

Many research groups and institutions are trying to tackle these problems with next-generation innovations and adaptations.

The Advent of Solar Flow Batteries

Flow batteries are one example. They are a novel form of battery in which electrolytes are kept separately in their own containers. Sunlight harvested via solar panel is used to activate these materials. As a result, the energy can be either stored or discharged at need. This strategy, known as solar flow battery storage, may be more robust against energy losses, periods of low solar energy or conversion efficiency and grid failures.

Prominent examples of solar flow batteries are found in such places as the Rongke Power installation in China. The staff here is working on the world’s largest flow battery, which is scheduled to go online in 2020. It can allegedly be able to store up to 800 megawatt-hours of electricity, which is enough to power thousands of private residences. 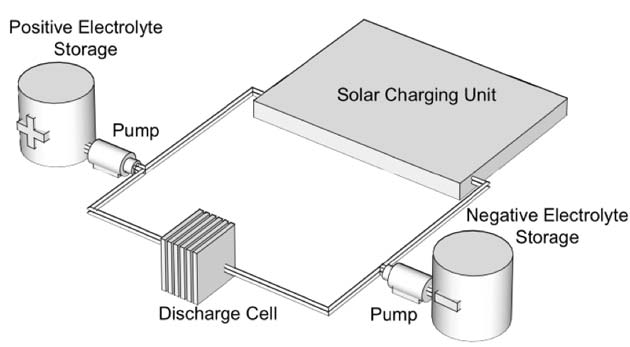 Flow batteries are also alternatives to lithium-ion power (which is the basis of current solar power storage, and can take up an impressive expanse of surface area to do so), as their optimal electrolytes tend to be vanadium (as in the Rongke battery) or zinc-bromide.

The downside is that the prices of these elements, particularly vanadium, is rising steadily in the face of this new form of demand. This may hamper the growth and feasibility of the emerging solar flow battery market, which is estimated to be worth a billion dollars more for each year for the next five years.

This is where groups like those led by Ulrich Schubert, working at the Friedrich-Schiller-University in Germany, come into the picture. This team is working on flow batteries based on cheaper and more abundant electrolytes, which include ferrous and organic molecules that are getting more and more stable in terms of shelf life, pH and other relevant characteristics. Therefore, these batteries may be stored, transported and used with greater efficiency and convenience.

The Alternative ‘MoST’ Method

The final products based on such research are still years away from availability on the conventional energy market.

In the meantime, solar flow batteries have competition from another compelling alternative to lithium-ion storage, a system dubbed molecular solar thermal (or MoST) energy storage, by its inventors at the Chalmers University in Sweden.

Led by Professor Kasper Moth-Poulsen of the Chemistry and Chemical Engineering departments at the university, this group has developed a group of promising photo-isomers into a workable energy storage solution that is specifically designed to be coupled to sunlight.

These photo-isomers, also known as photo-switchable molecules, are normally present in one chemical configuration (the ‘parent molecule’) until they are exposed to sunlight. This form of energy causes them to raise their own chemical energy until they convert into another configuration (the ‘high energy’ or meta-stable isomer) in which they can release this energy as heat. When this has been achieved, the isomers return to their initial form until they are exposed to sunlight again.

There are a number of these photo-switchable molecules, including the azaborinine derivative Dewar isomers, anthracene dimers, azobenzene or dihydroazulene/vinylheptafulvene couple.

However, the Chalmers team’s research and development led to the identification of a form of norbornadiene (NBD1), which converts to a quadricyclane (QC1) when exposed to UV light. 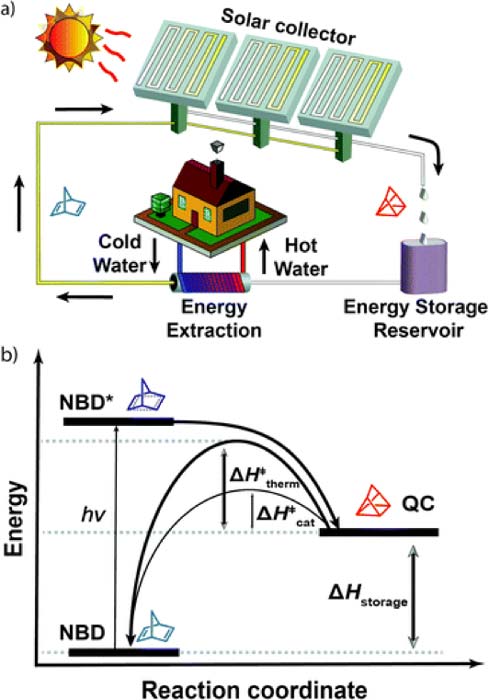 A schematic showing (a) an example of a power circuit based on NBD1/QC1 photo-switching, and (b) the basic energy states and reactions necessary to convert NBD into QC. (Source: Z. Wang, et al., 2018)

The team has worked on this photo-switchable molecule for the past year, resulting in significant achievements such as increasing its shelf life to 18 years, and a stability profile that means it can function as intended in environments such as outdoor testing areas.

The NBD1/QC1 switching system has also been associated with an energy density of 0.4 megajoules per kilogram of photo-isomer (MJ kg−1), which translates into the effective ability to produce thermal energy equivalent to 63.4⁰C. This step was done by passing the ‘switched’ QC1 through a bed of a catalyst, cobalt phthalocyanine, on a substrate of activated carbon.

Therefore, the team has demonstrated that it may be possible to integrate their NBD1/QC1 into a system that converts heat into electricity, as plants using equipment as turbines, as a result of burning fossil fuels, do today.

In addition, NBD1 has the advantages of having a low molecular weight, being increasingly stable to transport and store, and not resulting in emissions (as a molecule made largely of carbon and oxygen, it could, in fact, be produced using reclaimed excess carbon from the atmosphere). The Swedish team’s NBD1/QC1 system was also found to be associated with increasingly high volume cycles of use, exhibiting resistance to just over 40 heating cycles in the team’s latest publication.

There are some obvious issues to be worked out before a compound such as NBD1 can be leveraged into a viable competitor to solar flow-based solutions. For example, NBD1 is only switchable in response to the UV (and blue, at best) end of the white-light spectrum. Therefore, its efficiency is impaired through the inability to use more of the wavelengths provided by the sun. The team reported that this substance could only use 4% of the total photonic load supplied by the sunlight exposure involved in their most recent study.

In addition, the MoST system is also associated with an ability to heat water up to 83⁰C at best. Therefore, it may not be suitable for a conventional turbine system, which requires that water is converted into steam for it to work. 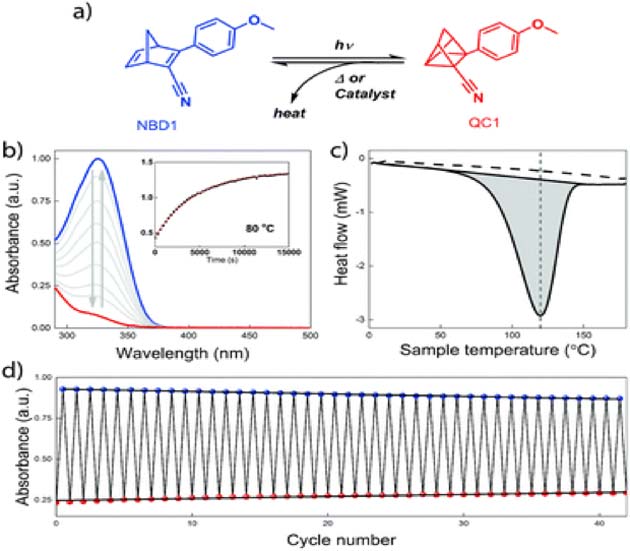 This figure details the wavelengths at which NBD1 converts to QC1, the maximal temperatures reached though the release of thermal energy through the catalyst and the number of photo-switching cycles achieved in the applicable study. (Source: Z. Wang, et al., 2018)

But all in all, the MoST concept has come very far in a relatively short span of time. However, it still requires refinement and optimization before it could contribute to the increased uptake of viable, sustainable solar energy solutions.

On the other hand, increased diversification in these options for power generation could be what helps us hit targets such as those set out in the Paris Climate accord in the near future.

Top Image: Simple schematic of a flow battery. Energy from a solar panel can power the positive and negative terminals shown, which induces storage in the electrolyte tanks. (Source: Public Domain)

previous article
Underneath an icon cracks the literal criterion
next article
The Marijuana Revolution: Medical Cannabis Is Now Legal In The UK 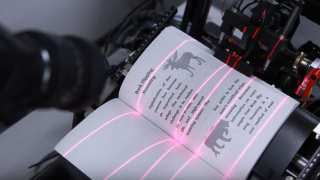