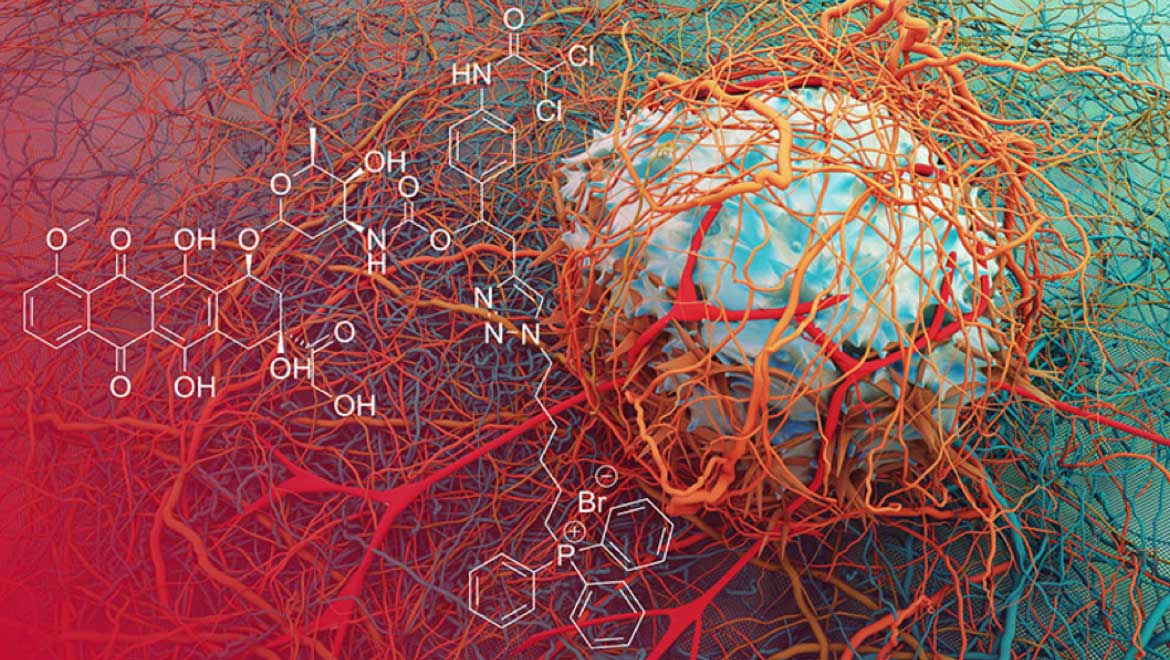 Many cancer patients and doctors have found that, sometimes, even though a certain treatment works well initially, it goes on to fail, later on. This is because tumors can adapt relatively quickly to the molecular onslaught brought on by therapy. Therefore, one patient may have to undergo multiple forms of chemotherapy for the same form of cancer throughout their lifetime. This may be distressing (as well as increasingly expensive) for patients.

How Tumors Resist Drugs and Therapy

Accordingly, many cancer biology researchers are working on this problem, which is known as tumor drug resistance. Based on their work, it now appears that this resistance gains speed as tumors enhance their energy use in the body. This, in turn, allows these masses to grow faster and more efficiently, and it also improves their resistance to the chemical attacks leveled by treatments intended to kill them.

Initially, tumors derive energy from anaerobic respiration. This is a “low-oxygen” form of metabolism among cells that is not normally seen in the human body.

However, tumors often promote anaerobic respiration as they start to develop and grow. This mode of metabolism supports a hypoxic environment, which, in turn, allows the tumor to produce dangerous, often inflammatory molecules within it and its immediate vicinity. These molecules damage the health of the normal tissues around it and may even induce necrosis or ischemia within the tumor itself. It is still not clear why a tumor would do this, although it may help tumors to develop the tiny blood vessels they often need to survive and grow.

However, if tumors become sufficiently large and long-lived, their cells may be able to switch to aerobic respiration. This metabolic strategy is generally more efficient and effective, which is why tissues such as the muscle prefer it to anaerobic respiration. Larger, aerobic tumors may be more likely to develop drug resistance.

Historically, the medical science response to this phenomenon has been to develop more novel and complex forms of cancer therapy. Unfortunately, aerobic tumors have been known to defeat even these. Some researchers believe that sufficiently large and advanced tumors could become resistant to any form of chemotherapy thrown at them.

A team of researchers collaborating across the universities of Texas (Austin) and Korea set out to tackle this problem in a new way. Their strategy was to find a new adjunct (or additive that may be bound directly to a drug molecule to enhance its efficacy in vivo) for existing therapies. This adjunct would target tumor-cell metabolism and prevent its switching from anaerobic to aerobic respiration. A tumor ‘stuck’ on anaerobic ‘mode’ may then be an easier target for the drug molecules attached to the adjunct. The team, led by Jonathan Sessler (Austin) and Jong Seung Kim (Korea), tested the potential of the molecule, dichloroacetic acid (DCA), as the adjunct in question.

DCA was conjugated to the well-known and well-validated chemotherapy compound, doxorubicin, in the course of the team’s development of their novel proposed therapy, C1. At present, trials of C1 are still at the animal testing stage. The Austin/Korea team have reported that C1 has exhibited appreciable efficiency when administered to mice with experimentally-induced tumors.

The team have also published these results in the CellPress journal, Chem. 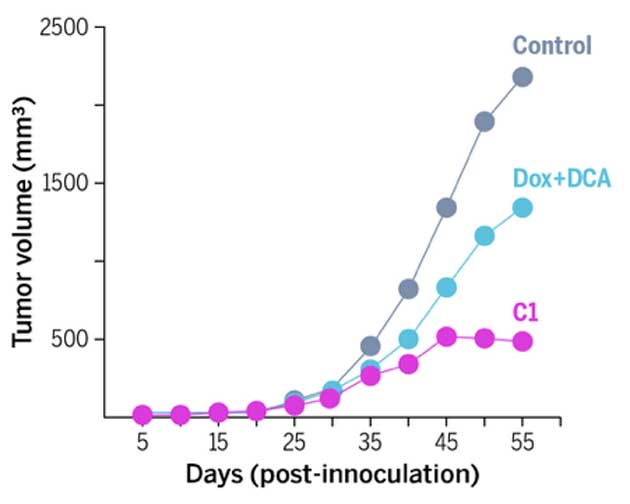 A graph showing the efficacy of C1 in curbing tumor growth, compared with that of doxorubicin and DCA alone and with a control. (Source: Jenna Luecke/University of Texas at Austin)

This paper may highlight the importance of cellular respiration in the progression and treatment of cancer. C1, which also delivers other compounds that target mitochondria in order to impair energy production in the affected tumors, does not contain any new or untested compounds.

On the other hand, the mechanism described by the Sessler/Kim team is too general in terms of cellular metabolic processes that it can be applied to any type of cancer.

Nevertheless, its new formulation may mean that it will need to pass the conventional clinical-trial process in order to gain approval as a therapy for humans. However, the authors of the new Chem paper are reasonably confident that C1 can be used to reduce mortality risks in patients with treatment-resistant cancers.

Top Image: The chemical structure of C1, with an artist’s impression of a tumor in the background. (Source: University of Texas at Austin)

previous article
Underneath an icon cracks the literal criterion
next article
Stars Of The Movie, Rio, Now Listed As Nearly-Extinct In The Wild