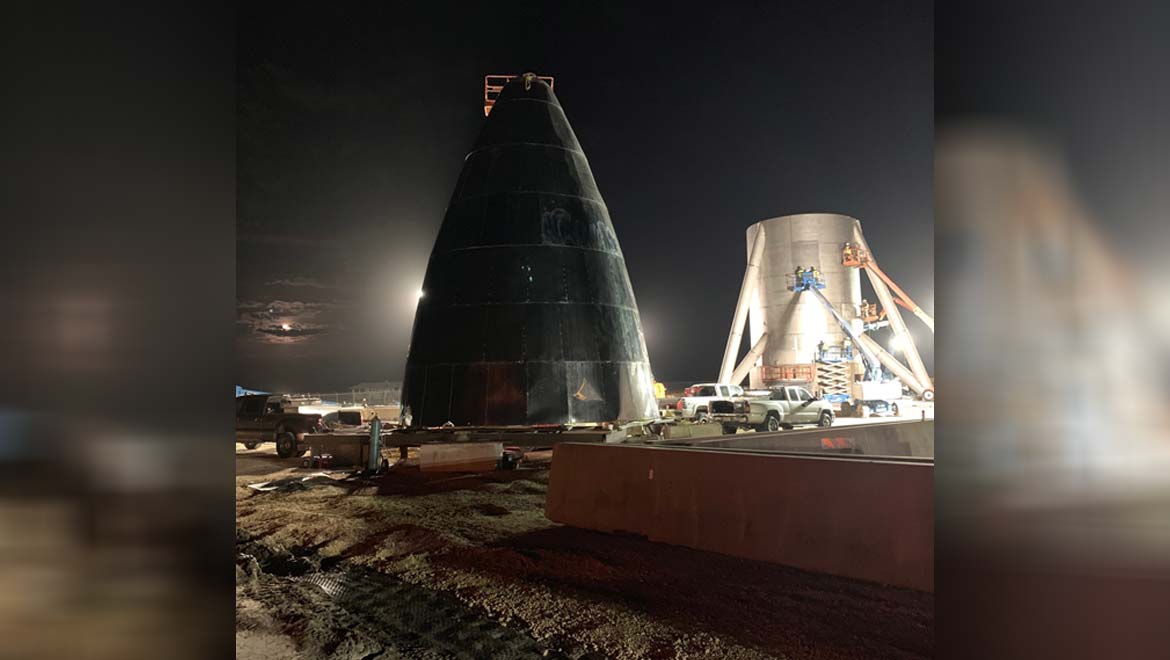 At one point in history, every form of popular media about spaceships portrayed them as shiny, silver saucers or rockets that gleamed as they took off or landed!

More time and practical experience with space flight have distanced humanity from this type of imagery. We came to learn that high-tech carbon-fiber and other similar compounds were more likely to survive blasting into space.

This is why every launch vehicle, including the Soyuz rockets that brought the two latest expeditions to the International Space Station, hides their metals under layers of insulation, protective, custom-made materials or both. These spaceships are impressive, but certainly, not shiny.

Elon Musk, on the other hand, has hinted that this situation may change again in the future. The SpaceX CEO recently tweeted a photo of what could be a spaceship in the process of its construction. The photo focuses on a nose-cone-like object that is patently made out of reflective if dark, metal. Musk’s caption for this image reads: “Stainless Steel Starship.” This message sparked a storm of speculation and questions on the social media platform.

Many of these responses have cast doubts on the idea of such a material's suitability for space travel, especially in a rocket with the use-cases that SpaceX intends for its next line of interstellar craft. Numerous reports have asserted that they will be reusable rockets, which will perform multiple round trips to extra-terrestrial locations within the aeronautical company’s reach (these places have largely consisted of the moon, but it may be a lucrative line of ‘tourism’ for the firm, nonetheless).

Therefore, many space enthusiasts have voiced concerns about whether a shiny metal will be robust enough to survive repeat trips through the atmosphere, let alone hold itself together once outside it.

However, Musk appears confident that the ‘stainless steel ship’ is a part of SpaceX’s future. One of his replies to the concept’s critics read: “Usable strength/weight of full hard stainless at cryo is slightly better than carbon fiber, room temp is worse, high temp is vastly better.” Therefore, it seems like someone has been telling Musk about the properties of stainless steel as they relate to space travel, and they do have a point.

Currently, the single-use landing modules used by authorities, such as NASA, manage the fiery ravages of returning to the Earth through shedding parts of their outer casing as they hurtle to the ground. This technique, which is known as ‘ablative shielding,’ is not compatible with SpaceX’s reusable craft strategy. It may mean having to service and replace a rocket’s outer layers after each and every journey. This could get expensive and cut into valuable launch windows over time.

Therefore, the company may prefer a more monolithic form of shielding, which metal may be able provide. Then again, if this metal is to be stainless steel, it won’t be of the common varieties we use and see every day.

Next-Gen Spaceships Could be Made of Steel

Common types of steel will be too fragile and brittle to use in new space-age-grade applications. However, other forms of stainless steel are made to be much tougher and more high-tech, in general.

Take the materials used in the frame of the iPhones XS and XS Max: this top-grade form of the metal was adopted by Apple following criticism of the weaker materials that led to the Bendgate scandal, in which some iPhone 6S models were found to bend much too easily. Some correspondents now speculate that something like this high-end alloy has gone into the ‘nose-cone’ tweeted by Musk.

However, this stainless steel may be even more specialized and validated compared to Apple’s chosen materials. They may be based on the SX500 steel formulation SpaceX developed in-house for the engines that will power the rocket. Therefore, we may be able to return to the shiny spaceships that once populated the collective imagination.

On the other hand, steel is also capable of scorching. Therefore, the stainless-steel SpaceX vessel (which has gone under the name BFR (as in Big F*cking Rocket) until now) may not be very reflective for long.

In addition, Musk has asserted that his steel ship will retain the plain-metal look, as any paint that coats it would burn away on return to Earth. It would be interesting to see what such a ship looks like after an interstellar trip.

Top Image: The image tweeted by Musk alongside his assertion that it is made of stainless steel. (Source: ElonMusk/Twitter)

How is a stainless steel iPhone XS better than any other aluminum phone? 2018, PhoneArena, https://www.phonearena.com/news/stainless-steel-vs-aluminum-iPhone_id110773, (accessed 30 Dec. 18)

SpaceX’s Second Job: Is This How Musk Will Achieve His Martian Dream? 2018, Evolving Science, https://www.evolving-science.com/information-communication-computer-science-technology/spacex-s-second-job-how-musk-will-achieve-his-martian-dream-00439, (accessed on 30 December 2018)