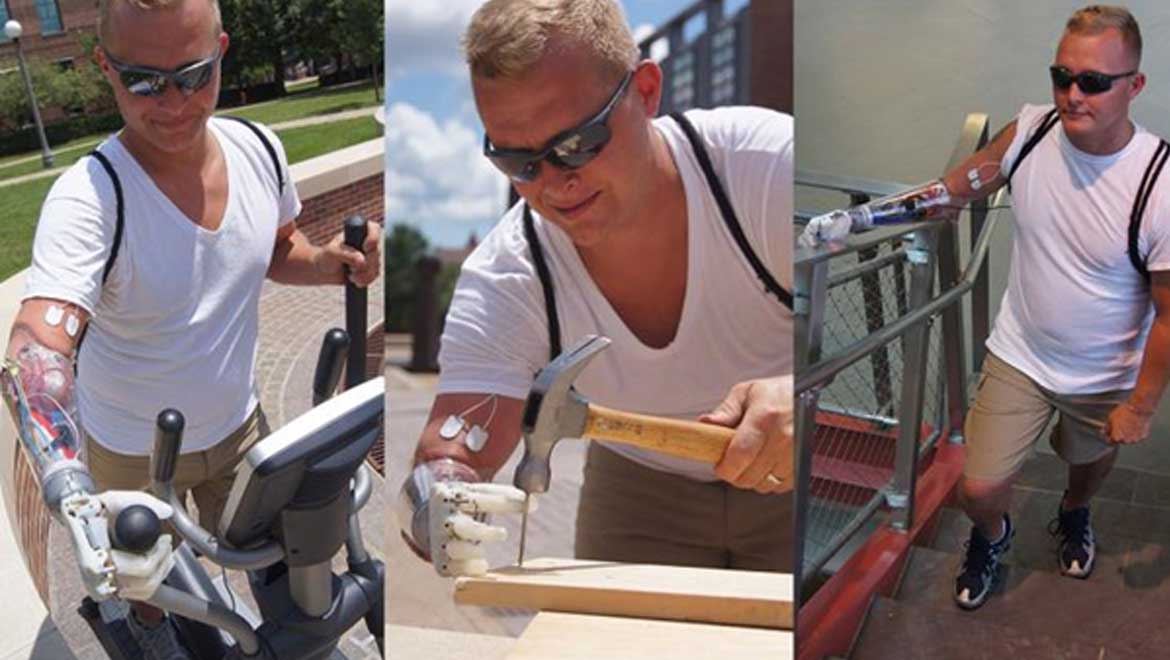 Synthetic limbs, i.e., for those individuals without arms or legs, are getting better in terms of form and function. These improvements include the way the prosthetics look and move, as well as how they allow their users to move and live their lives.

Furthermore, modern-day prosthetics can allow for at least some level of sensation, which, again, increases its usability. This sensation is delivered via electric or haptic impulses delivered to the skin in contact with the implant. The magnitude of this feedback is typically proportional to the stimulus going elsewhere along the device.

The Role of Electrodes in Prosthetics

The functionality of this concept involves the use of electrodes placed on the skin at a prosthetic limb's interface.

Unfortunately, this can be the weak point of the whole sensory system as the artificial sensation is influenced by the strength of impulse-related properties (e.g., electrical impedance) between the skin and electrodes.

This strength can be reduced by a number of factors like sweat and the failure of electrodes to stay in place on the skin.

Therefore, a team of researchers from the University of Illinois (Urbana-Champaign) set out to improve this interface to overcome the effect of the variables on sensation for prosthesis users. Their project was a success, and the written results have been published in a recent issue of Science Robotics.

This team was led by Aadeel Akhtar, a doctoral student in the Neuroscience and Medical Scholars Program at Illinois.

The researchers developed an artificial arm that featured an improved type of prosthetic with a new kind of controller. The arm supplied sensation by way of electrotactile impulses and thus depended on impedance between electrodes and the skin. 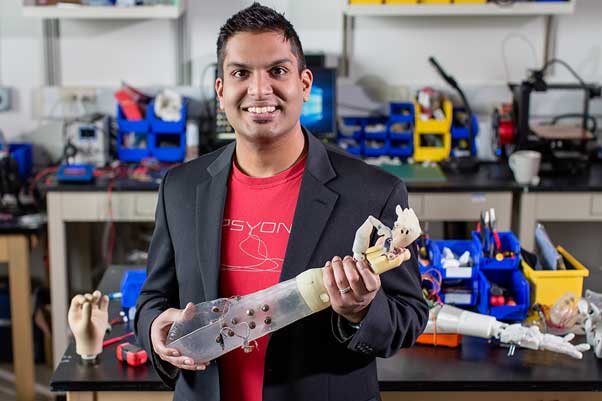 Lead investigator, Aadeel Akhtar, developed, along with a team of researchers at Illinois, an algorithm for sensory feedback in people with prosthetic arms. (Source: University of Illinois)

The controller was integrated to modulate the duration of the electrotactile pulses delivered, as well as the amplitude of the current supporting it. This modulation was done in response to the amount of impedance available to the system.

Therefore, the prosthetic had much better chances of maintaining the overall strength of sensation, even if the electrodes did slip or get sweaty.

Akhtar’s controller was developed using the other main aim of the project - to develop an algorithm that expressed how the parameters of the stimulation related to impedance in the presence of intensity of subjective sensation at a consistent level.

There are other similar models of impedance in artificial sensation available. But, the team reported that their new algorithm was a better fit for the empirical data available to them.

The analysis of the data was expressed using the coefficient of average correlation and resulted in r-squared values of over 0.9.

The group of experts moved on to the implementation of the controller, with its new algorithm, in an arm tested on two participants with amputations below the elbow.

They reported that the controller was able to adjust to the participants' subjective sensory feedback at a constant intensity of stimulation. The numbers were associated, with the Science Robotics paper, with an r-squared value of > 0.9.

As a result, it was able to maintain sensation for the participants, even if the impedance at the prosthesis' interface changed over time.

The investigators viewed these results as a success, especially as they noted that impedance was likely to fluctuate while using a prosthetic, to perform everyday tasks.

These findings may have solved, or at least helped solve, problems related to the maintenance of sensory control, of a prosthetic arm, for users. However, those in need of artificial arms have other issues.

One of these concerns is the motor control of prosthetic arms, particularly at artificial joints. For example, myoelectric joints are mainly used to support movement in artificial wrists and hands. However, artificial elbow joints are difficult to engineer, which means users may have particular troubles following the loss of their own limbs.

A recent study reported that amputees prefer myoelectric joints with streamlined degrees of freedom in their movement, to optimize their control.

The study also found that those with amputations above the elbow responded well to a prototype prosthesis with an experimental myoelectric elbow, although they had to make substantial compensatory motions with the rest of the body to do so.

Alternatively, prosthetic elbows can be controlled using residual movements of working shoulder joints, presuming that they are available (not the case for everyone who has lost an arm).

A recent study of electrotactile sensation in prosthetic arms could, one day, help improve on such devices, which allow users to perceive varying degrees of pressure on their fingertips through proportional electrical impulses at the prosthesis/skin interface.

This idea was achieved using an improved model of impedance in the presence of constant stimulation intensity. With this, increased sensory control for those with upper-limb amputations will soon be followed by a more efficient motor control.